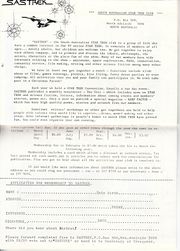 It has at least four fanzine publications:

This club sponsored conventions, such as Conflict and Roddcon.

In 1978, SASTREK began to sponsor weekend minicons that were not advertised outside the club. They began when Adelaide’s Channel 9 studios put on a once-only marathon of Trek episodes for the fans on a big screen.

In the early 1980s, Roddcon celebrated Gene Roddenberry's birthday. Held over two days, this event managed to attract some interstate fans. The Little Bird Awards were trophies presented to winners of the art display, fiction writing and costume parade.