Roddcon was a Star Trek: TOS Australian convention in August 1983. It was held in Goodwood, Adelaide, South Australia, by the SASTREK Star Trek fan club. 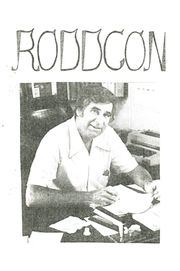 front of the program book

The program book is 31 pages long. The art is uncredited. The program book contains fiction by Helen Sargeant called "Theks", an intro by Diane Marchant, some long articles about the history of the show, the lyrics to the theme music, fan art, black and white publicity photos, but no other dates or identifying info. The program book notes that everything was free, but fans had to buy their own refreshments. On the Saturday, there was a break for lunch, and at 5:20pm, a break for tea (ie. dinner) which lasted two hours.

The convention schedule included the presentation of the "Little Bird Awards" (trophies for the art show, story competition and costume parade winners, based on Gene Roddenberry's nickname of The Great Bird of the Galaxy), and a screening of a 1979 skit, "Star Trot", from the Australian TV comedy series, "The Paul Hogan Show". [1]