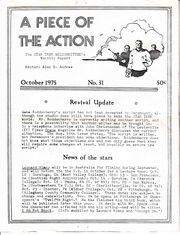 A Piece of the Action 31 was published in October 1975 and contains 11 pages. 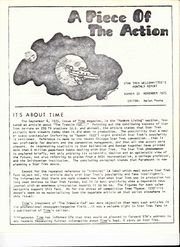 A Piece of the Action 32 was published in November 1975 and contains 27 pages.

A Piece of the Action 33 was published in December 1975 and contains 15 pages. 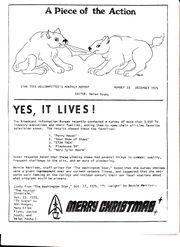 Within this issue is an interesting survey that was taken of more than 3,000 TV industry executives & their families which names ST as their third most popular TV program of all time. There is a brief section updating revival news, another on the "Ubiquitous Star Trek," news of the sitars, and book announcements.

The section on con notes has a very complete list of many upcoming ST cons thru Aug, and one con report. There are the usual pages devoted to STW information for the VMs, followed by-a lengthy report of a few efforts in ST publicity and a plug for a new department in the STl^ v^hich aimes at getting ST editors and artists together.

Although the STW info in P/A takes up too much volume (considering most of the readers are not STWers and therefore not interested particularly) the information compiled in each issue is always up to date and provides the best single source for recent news. Recommended. [1]

A Piece of the Action 34 was published in January 1976 and contains 15 pages. 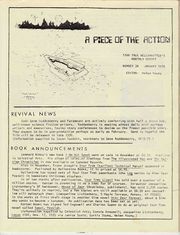 first page of issue #34
From the editorial by Helen Young:

STW Is often asked to speak out against something, to editorialize, to take sides--the idea, of course, being to protect fans, or for the good of ST fandom, or just fair play. And certainly we are eager to protect fans, and to work for the good of ST fandom, and we stand foursquare for fair play. And certainly we will never knowingly condone or promote dishonesty. But there are reasons why we feel it would be unwise for STW to editorialize or take sides. First off, there are currently 140 volunteer workers participating in STW. It is entirely possible, therefore, for us to have 140 different opinions on any one given subject! How then could we ever reconcile ourselves to all supporting one side or one viewpoint and be fair to our own people? Certainly every STWer is free to express their opinion on any subject as an individual, but to have the organization itself take a stand that some of its members might disagree with would threaten our very existence... How are we to determine who is In the right? Who are we to judge? Who are we to condemn? Of course we deplore certain things. Of course we have opinions. But if STW should take sides, we'd anger the other side, and thus diminish our effectiveness... We like to think we're the one place In fandom where all organizations and all fans can work together. Where everyone can co-operate. Where everyone can get or give information or help. We feel the best way we can effectively serve all of fandom is to remain neutral. So please don't expect STW to take sides or editorialize—allow us to remain a non-partisan organization so we can better serve all fans and all of fandom.

This issue leads off with a bevy of book announcements, and also has info on the stars, new products and a small section of "The Ubiquitous ST."

There is a very comprehensive convention calendar which lists only dates, places and addresses but is good for an at-a-glance chart of the upcoming con schedules. The con notes section describes 6 of these upcoming cons in more detail and actually has 6 con reports this time.

There is an editorial by Helen Young which defines clearly the position of neutrality that STW,must take on all controversial matters...something the readers should actually r-e-a-d and understand.

The rest of the issue is filled with about 5 pages of STW info en tout, and various ads. Recommended. [2] 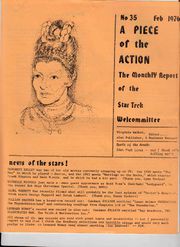 A Piece of the Action 35 was published in February 1976 and contains 7 pages.

A Piece of the Action 36 was published in March 1976 and contains 13 pages. This is the last issue published by Virginia Walker. 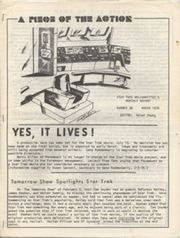 A Piece of the Action 37 was published in April 1976 and contains 12 pages. The publisher of this zine is now Josi Williams, with associates KathE Donnelly and Karolyn Popovich. 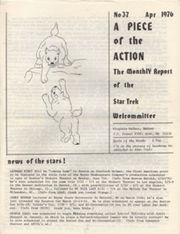 A Piece of the Action 38 was published in May 1976 and contains 14 pages. The editor announces that the fan readers of APOTA now outnumber the volunteers it was originally written for by 10 to 1, and that APOTA will now become more of a general newsletter and many of the usual sections will be discontinued; more detailed STW information for the 150 volunteers will now be sent to them on a separate mimeographed sheet of paper. The editor also says that after one issue, the new business manager (Josi Williams), has resigned and her duties pass on to Karolyn Popovich and KathE Donnelly. 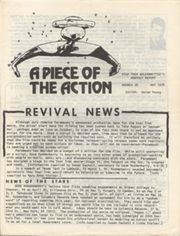 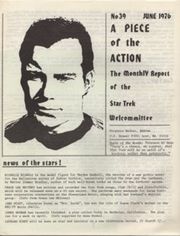 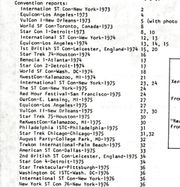 issue #39 published an index to the material that has appeared in the first 39 issues, including this list of con reports

It starts off with a good selection of news of the stars, and follows up with a fine section on conventions, especially good is a report on Equicon. "One Small Step, One Giant Step..." is a very good article on NASA's space shuttle the the efforts to get the President to name the first shuttle U.S.S. Enterprise.

For those people interested in issues of P/A and past subjects there is a comprehensive index of subjects and issues inside #39. The usual items fill the remainder of this issue. Perhaps one of the more informative this year. 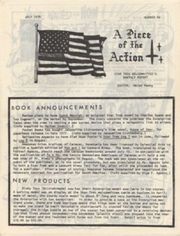 A new column in this issue is: "Dear Grace Lee," where fans ask Grace Lee Whitney questions. It should add some good personal interest to what can sometimes be a dry newsletter. A very interesting part of this issue is "A Fan's Handy Dandy Guide to STW Service," which describes the gamut of services available from fans. Definitely something to have. There are con updates, a small special interest article or two and the usual inclusions. Informative. Recommended.[5]