From Fanlore
(Redirected from Snape)
Jump to: navigation, search

Severus Snape is the potions master at Hogwarts and one of Harry Potter's teachers in the Harry Potter books. He has been a somewhat contentious fan-favorite since the first book was published. Although Harry was always hostile to him within the books, fan speculation on Snape's true loyalties was rampant and occasioned many theories, fanworks, and flame wars.

In later books, as Snape's difficult childhood and adolescence became canon, some fans aligned themselves against characters who were hostile to Snape in canon, like James Potter. The penultimate book left Snape's status extremely unclear, and some theorists felt that the final book did not live up to their hopes. (See also EWE and Potterdämmerung.)

The main Snape ships are somewhat controversial--Harry/Snape and Snape/Hermione, both pairings with a significant age difference. Some fans enjoy these pairings only when the younger party had graduated, or grown older, whereas other fans explored the pairing during the time-period depicted in the books. (See also chan.)

It is also common to pair Snape with characters from the Marauders' generation, such as with Lily Evans, whom he was canonically in love with, Sirius Black, Remus Lupin, or James Potter.

A fan in 2012 commented about her experiences in the Snape fandom:

... at that point in the fandom [2002] it was very Balkanized, and the Snape slashers were actually renowned at that point for generally being level-headed and rational grown-ups that it was fun to be around. Well, because they were grown-ups who'd been in other fandoms before and who'd come to this out of other fannish communities and knew the fucking social norms and were not a bunch of feral teenagers that had to be socialized.

And they also were not heavily invested in shipping wars because they were Snape slashers and they knew that Snape was not going to get a boyfriend in the books. Ever. So, we were not looking for textual validation. So, yeah, it was sort of its own little polite, well-mannered, sane — it sounds crazy saying this at this point now, but that's really, yeah, it was where the nice, polite, well-mannered rational grownups hung out when I first got into Harry Potter fandom. Well, remember this was also before any of the movies, so there wasn't the Alan Rickman thing going on yet either.

So, yeah, at that point, when you got into Snape you were into Snape for himself in all his ugly, nasty — greasy — horrible glory, yes.[3]

Gypsy Silverleaf, an early fan, has this statement at Harry Potter's Realm of Wizardry: 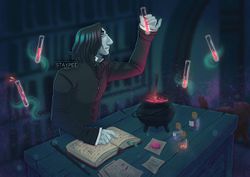