Tony/Rhodey is the slash pairing of James Rhodes/War Machine and Tony Stark/Iron Man in the Marvel universe.

Rhodey and Tony appear together in all three Iron Man movies as well as The Avengers 2. They are long-time best friends and Rhodey works as military liaison to Stark Industries.

A small number of fans have shipped Tony/Rhodey since the first movie, but despite being a buddy pairing with significant on-screen interaction and affectionate physical contact, it has remained a very small pairing in the larger Marvel Cinematic Universe. After the release of both the first and second movie it was outcompeted by the canonical het pairing of Tony/Pepper; once the first Captain America movie was released, Steve/Tony quickly overtook and surpassed both Tony/Rhodey and Tony/Pepper in the Iron Man fandom. Some fans speculate this is due to fandom's preference for Two White Guys pairings; others argue it is simply due to the change in actors playing Rhodey causing his character to be less consistent across the movies.[1] 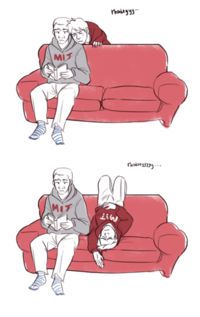