Eddie Brock/Venom is the pairing of reporter Eddie Brock and the alien symbiote known as Venom.

In the Venom movies (2018, 2021), Eddie was portrayed by actor Tom Hardy who also voiced the symbiote. Their relationship in this movie and their first date is slightly different from the one presented in the comics, much in part to the agreements between Sony and Marvel about Spider-Man's appearance in the MCU movies.

It should be noted that Eddie and Venom are often written as a couple in several different Venom comics runs dating back to the 1990s, including the recent Venom (2016) run written by Mike Costa[1], whose opening page states, "This is a love story." Another recent story-arc revolves around them protecting their baby.[2]

Kate Gardner of The Mary Sue wondered whether Venom had been "queer coded",[3] a term referring to character appearing queer without their sexuality being a part of the story.[4] Gardner soon noticed fan art depicting Brock and Venom as a couple appearing across social media sites, acknowledging that there were several moments throughout the film that implied such a relationship, including Venom turning against his species because of his time with Brock and deciding to french kiss Brock while transferring from Weying to him.[3] Many of the fans posting the art and discussing the characters' relationship online began using the name "Symbrock" to refer to them.[5] Amanda Brennan, lead of Tumblr's Fandometrics analysis team, said that

"Symbrock" fans existed before the film due to comics, but the increase in popularity was "undoubtedly" due to the film's portrayal of the characters which she said made Venom's dialogue more "casual" compared to how he speaks in comics, adding Brennan that dialogue such as "I am Venom and you are mine" was deemed to be particularly romantic by these fans, as was the idea that Venom be seen not as a parasite but as someone who "chose Eddie Brock and has a connection to Eddie Brock".[6]

When Sony began advertising the home media release of the film by presenting it as a romantic comedy focused on Brock and Venom's relationship,[7] io9's Charles Pulliam-Moore said it was the treatment the film deserved, attributing the change in strategy from the studio to the audience's response to the relationship. He added that it was rare for a film studio to "get on top of a so-so ad campaign" by adjusting towards the public's "reaction to a movie", believing it to have been successful.[8] Michael Walsh at Nerdist Industrie agreed with Pulliam-Moore, describing the move as "fully embracing 'Symbrock'" and calling it "brilliant". Walsh said that though the advertisement was clearly a parody, it also "feels like a far more accurate portrayal of what the movie was really like than the initial [marketing] hinted at", and further highlighted the kissing scene.[9]

Eddie/Venom is the dominant ship in the Venom (film) and Venom (comics) fandoms, based on works on Ao3. In fanworks it is sometimes categorized as M/M, but sometimes not due to interpretation of the symbiote as non-male.

i’ve just watched Venom and i don’t know what i expected it to be but it was not a gay romance between a human mess and a parasite, not that i’m complaining tho [12]

The 2019 Venom comics run was controversial. Venom was revealed to be manipulating Eddie, leading to a falling out between the two. Many fans saw this as a retconning of their previous relationship. The comics provided a canon Symbrock relationship, and many comics fans were Symbrock shippers who considered the two to be in a canonical relationship. So there was much discourse within the fandom during the run.

The fandom reacted strongly when the writer responded to criticism by disavowing the Symbrock relationship, calling it toxic.[13] Further tweets and comments by the writer were seen as been disrespectful towards Symbrock shippers, and some fans responded angrily.[14] The writers comments led some in the Comicsgate movement to think he was a supporter of theirs, but Cates was quick to deny any support for the group. 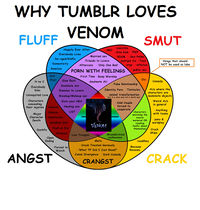 Edit of the Fanfic Trope Venn Diagram created by peppypear. Edited by Marvel-is-a-bisexual-disaster

A post by Tumblr user Marvel-is-a-bisexual-disaster, Why Tumblr loves Venom uses a venn diagram to illustrate how Symbrock encompasses almost every fanfic trope to become a ship that has something for everyone. As well as angst, crack, smut and fluff many of the tropes referenced in this post are also common in Symbrock works; including:

Other common tropes and story lines include: