Below is a timeline of Star Trek fandom, with a focus on Star Trek: The Original Series, from 1967 to present.

In February, fans who subscribed to Inside Star Trek received the first Star Trek Enterprises catalog, along with an announcement that Star Trek had been cancelled for the 1969-70 season. Fans were requested to participate in another letter campaign. A.G. Probert, who later worked on the special effects for Star Trek: The Motion Picture, wrote a flyer asking fans to organize protest rallies at local NBC affiliates. 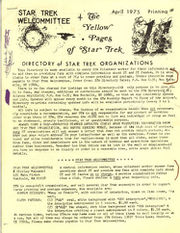 cover of April 1975 issue of the Welcommitte flyer