The Avengers Crossover Big Bang was a big bang challenge in Avengers fandom focused on crossovers. Authors had to write a minimum of 5000 words, and artists had to create a minimum of piece of a medium of their choice.

Title: This Little Light of Mine
Author msdori
Artist caz2y5
Fandom: NBC's Revolution
Pairing: Clint/Coulson (background, implied)
Rating: Teen and up (language)
Warnings: Canon-typical violence
Summary: An unknown force is about to shut down every power source in the world, including Tony's arc reactor, permanently. Jarvis has found information about something that may keep Tony alive, but the Avengers are miles away with no means of transportation when the power goes out. 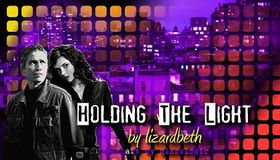 Art by glasslogic for Holding the Light


Title: Fragments
Author: mistokath13
Artist: elenorasweet
Fandom: The Losers (movie)
Wordcount: about 9.5k
Pairing: none
Rating: FRT-13 or PG-13
Warning: none
Summary: “Why do you think I’m going to be disappointed?” Jake shrugged with one shoulder. “I’m not the kind of perfect supersoldier they - you - have probably hoped for.” Steve leaned back in his own chair and grinned. “Neither am I.” He tilted his head to the side and regarded Jake for a long moment. “Maybe we should start from the beginning.” Or: Two soldiers meet in a Hydra cell, but there’s more to it than both Steve Rogers and Jake Jensen are aware of.


Title: Thieves, Spies, and Accidental Allies
Author: ella_bee
Artist: caz2y5
Fandom: Leverage/Avengers
Wordcount: ~16,800
Pairing: Mostly Gen, though hints at established pairings. (Parker/Hardison, Nate/Sophie, Tony/Pepper, and whatever the hell Natasha/Clint are)
Rating: T
Warning: minor violence / injuries, though not in any great detail. Leverage canon up to 5.10. (There's a part that mirrors Leverage 5.12 that I SWEAR I wrote before the episode aired, but I can't prove it. *shrug* They did it better, anyway.)
Summary: In order for the Leverage Team to get justice for a client, they must infiltrate Stark Tower.


Title: Reactivation
Author: crescent_gaia
Artist: evian_fork
Fandom(s): Mission Impossible: Ghost Protocol and Bourne Legacy
Word Count: 15,660
Pairing(s): Clint/Natasha, Steve/Tony, Ethan/Jane, Ethan/Clint (if you squint and tilt your head)
Rating: PG-13
Warning: Spoilers for all movies; Violence
Summary: Clint Barton is called in as William Brandt with his IMF team. Seems that they're tracking the last Black Widow of the Red Room's program. While Clint is off being another person, Natasha starts to feel like her old life is crawling back while Tony's problem with his heart becomes bigger.


title: Behind the Wrecking Ball. Three Volumes of madness & Mayhem from the Troop of Tricksters.
Author: lilithrain
Artist: mangacrack
Fandom: Supernatural, Avengers, War of the Worlds, DoaFantasy/Judge Dredd.
Wordcount: 32,289.
Pairing: Loki/OFC, Gabriel/OFC, Sam Winchester/Captain Stacy (Captain America).
Rating: R.
Warning: Possible spoilers if you haven't read the books/comics/graphic novels for: H.G. Wells War of the Worlds, DoaFantasy - Sluts in training, Judge Dredd. Otherwise you should be alright.
Summary: The story reads as a series of Volumes, as penned by the Scribe of the Tricksters. With one impish gift at the very end, but you have to wait for Volume 3 for that one.


Title: The Inceptionable Hulk
Author: canadiandiamond
Artist: glasslogic
Fandom: Avengers/Inception
Word Count: 11,199
Pairing: n/a, though some Clint/Natasha sort of implied.
Rating: PG-13; some violence/strong language
Warning: Spoilers for Inception, some strong violence and a little violence.
Summary: Cobb is approached by a mysterious man claiming to belong to an organization named SHIELD. He has a task for Cobb and his former team, giving them little choice whether they'll accept the mission or not. And the mission? Involves a certain Doctor Banner that SHIELD has been keeping an eye on for some time now and for whom they have plans, which is where Cobb's team comes in.


Title: Red, White, Whatever
Author: elyss_blair
Artist: dark_roast
Fandom: Avengers (Movies Universe)/ Hellboy (Movies)
Wordcount: 45,000
Pairing: Steve Rogers/Tony Stark (also, minor/preslash/hinted at: Loki/Fandral, John Myers/Nuada, Clint Barton/Phil Coulson)
Rating: NC-17
Warning: minor violence
Summary: AU set after Hellboy II and diverging from Avengers movie-verse before the Avengers movie. While trying to communicate with Asgard, Jane and Selvig open a dimensional rift that drags Thor back to earth and pulls Nuada, Nuala and Loki out of limbo. At the same time Jane, Clint and Selvig get sucked into the rift before it closes. SHIELD and the BPRD have to work together to wrangle the fugitives, figure out a way to get the missing SHIELD personnel back and stop HYDRA, who are trying to get their hands on the technology that created the rift to begin with. In addition, Abe inherited information from Broom (who was a friend and colleague of Erskines) about the Super Soldier serum. Information about side-effects that are beginning to make Steve think he's losing his mind.


Title: Looking For My Heart
Author: rainbowrites
Artist: crescent_gaia
Fandom: Avengers/His Dark Materials
Wordcount: 17K
Pairing: Clint/Natasha, a few mentions of Steve/Tony, Tony/Pepper, and some Clint/Coulson if you want to look at it that way
Rating: ﻿T
Summary: In which Natasha is a witch, and Clint's useless in a fight. That is, just because your heart's outside your body doesn't mean doesn't mean people see it Loquis lands on Clint’s nose, and spreads her wings like a gossamer mask. “Oh baby,” she laughs, “we’re all monsters here.”


Title: Sometimes You Need A Scorecard
Author: yanzadracan
Artist: whiskeyinmind
Fandom: Avengers/Leverage/The Bourne Legacy/X-Men
Word Count: 20,243
Pairings: Eliot Spencer/Clint Barton; Nate/Sophie; Tony/Pepper; Natasha Romanoff/Phil Coulson;
Rating: R
Warnings: language; a little sex, a little violence
Summary: Sophie told Eliot he was no longer the same man that worked for Damien Moreau. The Leverage Team finds out he is still that man plus a little more, and that's okay because a Hawk and a Spider have his back.