"Oh, man, what an extraordinary con. Once again I had the most amazing time. I've watched countless vids, had fabulous conversations, spent time with some of the world's awesomest women (and a handful of also awesome men. *g*) I love this con so much, I can't even tell you." ~ kassrachel

Vividcon 2008 was the seventh Vividcon. The convention sold out in six minutes, although there was significant turn-over on the subsequent wait list. A copy of the 2008 schedule is archived here.

Anoel, an attendee, took extensive notes at some of the panels. They can be found here.[1]

Vidding History: 1980-1984. Moderators: Sandy Herrold and Kandy Fong. Follow the history of vidding step by step, from one of the first true videos ever made through the introduction of point of view and fading to black! See the first multi-fandom vids, the first shorts, the first comedy vids! A pdf copy of the panel notes can be found here [2]. 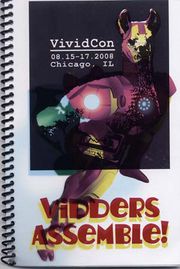 The short version of the panel notes:

The Two-Hour Kiss: An After Effects Tutorial. Moderator: astolat. After Effects is amazing but kind of huge and intimidating, and it helps a lot to know what you want to do before you begin. So rather than trying to do a complete overview, in this session we're going to go step-by-step through creating a non-canonical kiss, using the case study of the Eric/Vince kiss I created in Pon De Replay, an Entourage slash vid, which will hopefully serve as an overview of some things you can do with After Effects and how it can fit into your overall vidding process. If you want to bring a laptop and follow along, I'll be working with AE, Photoshop, and Premiere, all version CS3,and you can download the source clips." Panel notes are here.[2]

Collaborative Vidding: But Who's on Top? Panel: Destina & barkley, gwyneth & Jo, Jill & Kathy, Sandy and rache and Seah & Margie. Why collaborate to make a vid, instead of just working solo? Who comes up with the ideas, or the music? What if the other person hates the idea or the music? Howdo you get two (or more!) visions to mesh? What happens if there's an argument? Is it worth it? If you've ever wondered about any of that, here's where you can find out some answers. Five sets of vidders who've worked together in pairs or groups will be talking about their processes and fieldingany questions you might have about how it all works."

Color. Moderator: Luminosity. They give Oscars for this stuff! How filmmakers use color to enhance visual storytelling. How the palette of the film can define our experience. Why filmmakers pick the colors they do. Lumwill use pro source to illustrate a panel about the meaning of color and palette in movies. We will brainstorm about using color in vidding. Learn what to look for in order to see film as well as watch it! Panel notes are here[3] and here[4]

How To Reinvent Yourself in Vidding. Moderators: Buffyann and Milly. It's easy to get stuck in some sort of rut in vidding. You're bound to keep liking the same shows, characters, music-you even have your own editing preferences. Sometimes you can even feel stuck: you want to evolve, change, shake up your brain a little and come up with something new and fresh. This panel will explore the many ways vidders can and do accomplish this. Is it necessary to push yourself into unknown territory, even if that means possibly failing? Or can you still evolve on a specific path even if that means being bound to a certain style/fandom/theme?

I Suck. Moderators: eunice and sisabet. This panel will address strategies to overcome overwhelming vidder insecurity, ennui, fandom crises, and general sucKitude. But first? We WALLOW!!! Chocolate will be provided.

Music Theory and Composition. Moderator: nestra. Why does a minor key sound sad? Why is an augmented fourth called "the devil's interval?" Come discuss why music makes us feel the way we feel, and how to use that effectively in vidding.

The Tao of Mac[6] Moderators: SDWolfpup and gwyneth. It's bright, it's shiny, it's extremely intimidating: now that you've got a Mac and a desire to vid, are you thinking "What do I do next?" This panel is for new and experienced vidders alike, whether you're starting out with iMovie or making the move to Final Cut Pro. We'll talk about the whole process, from ripping source to exporting your finished vid, and get your good ideas as well.

Vidding/Writing Comparison. Moderators: Blacksquirrel, KK, and Kat A. Some fans write; some fans vid; some do both. What aesthetic/narrative/ideological/ technical differences make one or the other work better for the emotions, ideas, and stories you want to express as a creator, or experience as a viewer/reader?

What Do We Want From Vids Now? Moderators: speranza and counteragent. The purpose of this panel is to discuss current motivations and practices of vidding. Do we make vids for the same reasons we've always made them? What are vids doing now that is new, or is there nothing new under the sun? Are there new trends in vidding, or are these just evolutions of older forms? How far can we push the envelope and still consider our creations fan vids? Paired with the Vids that Push the Envelope vidshow. Panel notes are here[7],here,[8] and here.[9]

Action[10] VJ: bradcpu It's all about music, motion, and energy. Whether it's a character study, meta, or just a way to sell a show to new viewers, these vids all get their message across in a visceral, kinetic way. And are damn fun to watch.

Anime Music Videos - a Pre-Digital History[11] VJ: AbsoluteDestiny There was a time when amv creation was not an art of digital manipulation. It's not well documented, it's not commonly talked about and it's certainly not very easy to find examples from. The early amvs have in most cases vanished along with the happy few who made them. Lost in vague fannish memory like a convention hangover. In this talky vidshow, AbsoluteDestiny will guide you through the little-told story of amv beginnings. It's a story filled with talky-face, big hair, shipper wars, weird al overdose and lots and lots and lots of VHS tapes.

Vids That Push the Envelope[12] VJs: Speranza and Counteragent

Club Vivid[13] VJs: AbsoluteDestiny Friday night dance vid party and mixer. We’ll be showing a selection of dance vids, with dancing in the vidshow and panel rooms, quiet vid-watching in the con suite, and drinks and chatting in the 2nd floor alcove.

Ensemble[14] VJs: par avion and Wolfling Characters in vids can be like potato chips: sometimes, you can't stop at just one (or two)! This show explores the various styles in Ensemble vidding, from focusing on just the core cast to including significant recurring characters or examining the entire fictional universe.

Joy[16] VJ: Katie M. A show dedicated to vids that make us bounce up and down in our seats with glee when we see they're on the playlist.

Second Bananas[17] VJ: Deejay "...yes, we have no bananas, we have no bananas today...." Because we have Second Bananas instead! Tired of seeing the Heroically-Tight-Pantsed-High-Falutin'-Stars get all the vidding glory? Bring out your unsung heroes ~ the hardworking sidekicks, the underappreciated character actors, the heretofore unspotlighted support teams of overly vidded Pretty Boys/Girls!'

The End of the World[19] VJ: Greensilver The end of your world, or the end of the actual world: there's always an apocalypse on somewhere.

Auction[20] VJs: concom Vids made to order by and for the brave and generous souls who participated in this year’s vid auction.