"What a terrific con. First time out of the gate, this con kicked ass!" ~ destina

Vividcon 2002 was the first Vividcon, and was held in Chicago on August 16-18. Programming itself was only for Saturday and Sunday; Friday was for hanging out and setting up.

The vids that premiered at the con were offered on a contape; while a few people had asked for a DVD-ROM, DVD players (particularly that could play home-burned discs) were not yet common enough among fans to make a DVD worth doing. (Note how the description for the Recruiter vid show mentions asking people for tapes when a show piqued your interest -- this was also before torrents made online sharing easy. Note also that the Etiquette panel asked about the ethics of copying vid tapes, rather than reposting someone else's vid to one's own Youtube account.) 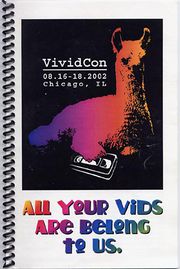 DVDs of all the shows did exist, however; Vividcon was the first Western media con to use DVDs as their vidshow masters, rather than having a stack of submitted tapes that needed to be swapped in and out as the vidshow progressed. It was also the first con to accept electronic submissions, and to develop electronic submissions standards specifically designed to make creating a high-quality master show DVD possible. (These standards are now widely in use for vidshows at media cons.)

After the con, there was some discussion about whether it had been heavily weighted toward slash vids. Prior to Vividcon, vidshows tended to be somewhat segregated (e.g., MediaWest shows gen vids, adult (het) vids, and slash vids all at separate times; and many slash cons prefer to show only slash -- or at slash-friendly gen -- vids), but VVC freely mixed gen, het, and slash vids within every vidshow, with no warnings. The result was that some gen fans, exposed to far more slash vids than they were used to, perceived a strong slash tendency. When the vids were added up objectively, though, no such bias was found; the mix was fairly even, in accordance with the con com's attitude of "vids is vids is vids".[1]

Progress reports for that year are archived here and here.

Retrospective, or How on Earth Did We Get Here? (This was a mixed panel and show. No playlist is available.)

VJ: tzikeh
From slideshows set to music to digitally created mini-movies available for download, and everything in between: tracing the changing face of vids and vidding.

Experimental Vids: Stepping Outside the Box (playlist)[2]. A review of the vid show by Sandy Herrold can be found here.

VJ: Carol S.
Showcasing vids that use unusual visual or audio sources, such as filters, stills, foreign-language lyrics, or no lyrics at all, or whose storytelling technique is unfamiliar; a deliberate lack of narrative or theme, etc.

VJs: Waldo and Nelle
Miss your favorite con this year? This is the place to catch up: vids in all genres that have premiered in the past year at other cons.

Constructed Reality: I Don't Remember That from the Show!(playlist)[4]

VJ: Amanda T
Taking the source material and using it to create something completely differetn from canon -- a relationship that never existed, encounters that never happened, stories that were never told.

VJ: elynross
The vids that make you say "But I don't need another fandom!" -- right before you start asking for tapes. (playlist)[5]

VJ: tzikeh
If you have to ask, you'll never get it.

VJ: Susan
Showcasing vids that explore individual characters by focusing on a story arc, highlighting an internal struggle, or otherwise examining a particular side of them.

VJs: Carol S. and Katharine
Vids that are making their debut at Vividcon.

Whitman's Sampler: Bring Your Favorite Vids (Note: This was held in the con suite as an informal gathering during Vid Review, for those who preferred not to participate in the vid review. No playlist is available.)

VJ: unmoderated
An informal viewing of favorites. Members are invited to bring their favorite vids (or select from the tapes available in the VividCon tape library) and share them with others, discussing what makes them especially loved.

VJ: Laura S.
To wrap up the weekend: a repeat showing of vids shown during the con that members want to see again.

Moderator: elynross
Using one or two vids from each show except Premieres, we'll be discussing how viewers can enhance their vidwatching experience, touching on aspects that will be more fully explored in the weekend's panels, including both the technical and the aesthetic. Narrative, color and movement, metaphor, song choice, clip length and choice, etc.

Moderator: Killa
Exploring the artistic elements, such as color, composition, movement, etc., that can enhance a vid beyond the basics of cutting to the beat ad working with lyrics. How to incorporate these elements into vids, and enjoy watching vids on more levels by understanding how these elements work. We'll also touch on how the dominant aesthetic changes, and in what ways it has changed in the past.

Moderator: sockii
You hear a song and instantly see a show or a character in your head -- but do they really fit together? Matching song tone and feel to fandom and vidstory, or finding the right fandom to go with that song you've been holding onto for three years, can take some doing. And will the rest of us, the viewers, agree with the vidder's decisions? What makes this song work for that fandom, or not?

Crossing Fannish Lines: Vids We Love for the Fandoms We Don't

Moderators: Sandy Herrold and Rachael Sabotini
What is it that grabs your attention about a vid in a fandom you know little about, or even actively dislike? What is it that makes you overcome your own barriers about watching and liking vids? How can you improve the chances that viewers who don't watch your show will enjoy your vid?

Moderator: Luminosity
Exploring how movement, both within clips and between clips, can create a better-flowing storyline or a more vibrant vid, and how recognizing these movements enhances your enjoyment of a vid. Includes synchronizing motion within a clip to motion within the soundtrack, using motion in one clip to move into the next clip, using motion to direct the audience's eyes, etc.

Moderator: Chris Harshman
The basics of vidding with a computer, using Premiere on a PC. Capturing source material and working with it.

Intro to After Effects

Moderators: tzikeh and elynross
An opportunity to examine specific vids from the weekend in greater detail , from both vidding and viewing perspectives. Suggestions for vids to review will be gathered at the Premiere vidshow on the Viewer's Choice ballots.

Moderator: Maygra
Want to know why this clip, and not that one? What the vidder was trying to achieve? What she was thinking? Some vidders will be available to be grilled answer questions about their techniques, intents, and secret recipes. (Questions were collected beforehand on the Viewer's Choice ballots.)

Moderator: Katharine
Is it acceptable to vid a song that you know someone else has already vidded? Does it depend on whether it's different fandom, or not? If a vidder does a really great edit, is it okay to use it in your vid? What's the etiquette on copying and circulating vid tapes? How much is too much to charge for a vid tape?

Moderator: Jenn
Just as in writing, a clear point of view (POV) in a vid can strengthen a storyline, while uncertain POV can confuse the viewer. How to recognize and get comfortable with establishing POV, changing POVs, and clearing up confusing POVs.