"I would do anything for love, but I won't do that! ...oh, all right." ~ blurb on astolat and cesperanza's vid Anything For Love which premiered at Vividcon 2012. 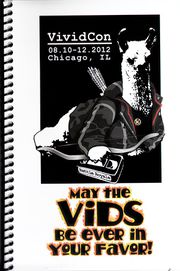 cover of the 2012 program guide with a Hunger Games theme

On Do You Vid Your Myers-Briggs?

Fun and fascinating concept; wish we'd had even more time to delve into how Myers-Briggs—what's the word, poles? not poles—affect the way we make and interpret vids. That people have different MBTI types when they're beta-ing vs. when they're watching; when they're a vidder vs. when they're a "real person" (I volunteered this, because in life I'm a thinker and when I'm making or analyzing fannish creations I'm more of a people-focused feeler). Some people like vidding because it allows them to explore their less dominant traits; "vidding allows me to feel"/"vidding allows me to go to a thinky place."[2]

On Typography in vids

Killa posted handouts from this panel at her journal.[3]

On Setting the Pace: Extended Panel Notes can be read here.[4]

Good things to do:
Vary what you do on a beat (cut, action)
Continuity, leading viewers
Serve the vid/story
Maintain audience's attention
Match the song
Indicate awareness of changes in the music
Use/pay attention to energy and motion within longer clips
Build momentum—can use similar-length clips if there's more going on in them...[5]

We brainstormed a list of platforms where people post and watch and host/download vids, then discussed the relative merits and downsides of several of them. YouTube allows you to reach different audiences than insular fandom. Some people don't care about non-fannish audiences. There are some tech accessibility issues, esp with mobile. Don't like how you can't download; others download immediately (with whatever additional software) because there's no guarantee the vid will be there the next day. Prefer AO3/LJ/DW for continuity of identity/links. "Dislike" button doesn't offer chance for concrit.[6]

On Structure of a Vidshow:

On WIP It Good:

"kuwdora started out with a chart showing categories of vid production and their various substeps: pre-vidding (including searching for and obsessively listening to songs), outline/storyboarding, grunt work (ripping, clipping), working in the timeline, export, distribution. Neat screen shots of varying techniques here, such as obsessive24's handwritten notes and heresluck's detailed spreadsheets. One example showed something similar to how I work, which is with a table with lyrics down the left column and clip matches down the right."[8]

On Vid Your Id:

"Panel started with various definitions of what the id is, according to rambly, jargon-filled articles pulled up on their phones and iPads. "If our ids were running around, that'd be a problem. If our ids were a vidshow, I'd watch it." Superego: "No, don't do this." The enemy of id vidding. (I add mentally: Shut up, forebrain, bane of my creative life.) "Who here is a thinking person? Don't do that. Bad." They (especially sisabet) were funny presenters and the whole panel was enjoyable. Make the vid you frikkin' want. It comes from your gut. Birth is messy. You can clean it up later. "If it really gets to me, it'll connect with others."[9]

On Let My Lyrics Go!:

"Then rho and cherry played a series of very different instrumental pieces and the audience volunteered what emotions, images or fandoms they evoked. A super fun and illuminating exercise—at least, for those who didn't proclaim their utter lack of musicality. Other points: Some canons have such distinctive music that it's hard to use anything else. Maybe you have to go totally opposite."[10]

On VSL (Vidding as a Second Language):

On Shadows and Fog: Vidding Horror:

"Horror as source; horror as vid genre. Not always the same. I went into this with mild curiosity as I'm not (I thought) generally a horror fan....Then Jetpack Monkey in his fannish passionate intro reminded many of us that we do actually like horror, even if it's a subset of horror. ... Remember that the definition of horror is not gore but the uncanny, the unheimlich. The other, which threatens. There has to be an element of the unknown combined with an element of the familiar. Do, indeed, love being thrilled/scared by much of that stuff."[12]

General panel reports/notes can be found here, here, and here.[14]

A few comments on the vid shows (both formal and informal)

On History of Vidding: Club Vivid

This year, I especially enjoyed hearing the story behind why "The Joxer Dance" from Xena always opens Club Vivid, inasmuch as it is a story, as well as watching tzikeh and Killa's classy multifandom dance vid "Puttin' on the Ritz" and SE's Evil Love Shack of Darkness (The Evil Dead trilogy), which just kept going."[16]

On Let's Put on a Show

I love this con so much. I love coming together around vids and how much we love them and how much we enjoy talking about them. I love seeing shiny new things which inspire me to stretch my own skills far beyond where they are now. I love the feeling of time telescoping such that the moment I'm with friends again, it's as though we were never apart. I love meeting new people and seeing new vids and having new ideas. I love the ridiculous weird hilarious conversations which never happen anywhere else. I love the way the whole con feels like a smorgasbord banquet for which the most spectacularly diverse visual repast has been prepared and which we get to enjoy together. I love the dance party which is always one of the highlights of my entire year, period. I just love this con.

And now, six thousand words of con report! Featuring some reminiscences of things I got to enjoy doing, and also many, many vid recs.[18]

In the end, the minute I sat down in the first vidshow, I realized that I had not fully realized the power of vids made cinematic. I was transported and completely absorbed by every vid, even those I would never have sat through if they'd played on my computer. It helped, of course, that the vids screened at VVC are incredibly well crafted and polished, and that both source footage and music are now more indie and diverse than in the earlier days of vidding. Tears sprang to my eyes several times in that darkened room, and not only for media that are already dear to my heart...

The thing I was most excited about was Club Vivid, and it lived up to every possible excited expectation. I love dancing; I love being surrounded by excited fans; I love enthusiastic geeky unselfconsciousness; I love dressing up and seeing other people dressed up; I love vids; I love open bars. So there really was no way it could go wrong. I think it was the dance party I have been waiting for all my life[.][19]

[on the] Forever Reblog panel, which was about vid audiences on different platforms. This is a subject near and dear to my heart right now, as I've shifted a bit from LJ to tumblr and have a vidding tumblr in addition to my regular one. The conversation was interesting -- a bit more focused on YouTube and AO3 than I thought it would be, but these things are all of a piece, really; in a later conversation with someone I described tumblr as being the blogging platform of the YouTube vidding community, which in a lot of ways it is. The YT community has embraced tumblr for vid posting and vidding discussion to a much larger degree than the LJ-based vidding community has.

This is our Vividcon 2012 premiere vid which we enter in the category of... best documentary. The VVC audience summarized it as "Dubconned into feels," which pretty much is both the story of this vid and fannish life in general. [25]

The Atlanteans came, they explored, they destroyed lives and families and whole civilizations. The people of Pegasus have had enough. [26] (People at the con largely said: holy wow, we have never seen this argument made in a vid before! Others said they had seen similar vids, illustrating the wide range of vidding exposure in the audience)