Home from vacation and Vividcon, which was, to understate the case, amazing. Met some incredible people, broke a shoelace on my boot (before I got to wear them!), watched incredible vids, bonded with several types of alcohol, and became a twitter addict." ~seperis

"I have to confess I was a little bit cynical at the beginning about all the earnest 'we want you to have a good time' messages, but I quickly realised that it was entirely genuine and not the cult-like drink-the-koolaid phenomenon it had seemed like online. (Or possibly I just drank it! If so it's the happiest cult I've ever been a part of!)"~bop_radar

In particular, in light of the accessibility concerns that were raised this year just a few weeks before the event, I was impressed by the concom's ability to turn on a dime and make changes to help address many of the needs that were identified. There's sure to be more conversation about all of this, and probably more work on the part of the concom and volunteers to implement any changes they decide on, but I think they're off to a great start."~laura shapiro 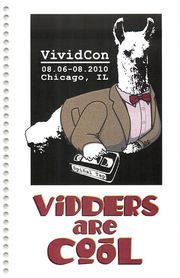 cover of 2010 program, Doctor Who theme

elynross served as con chair for the last year before turning over the reins to renenet in 2011. The convention again sold out in 16 minutes.[1]Attendees began to use twitter in increasing numbers to communicate during the convention.[2] A significant amount of debate took place in the weeks preceding the convention that revealed a growing schism between attendees who saw Vividcon as a platform for social justice and those who saw it as a place to celebrate the art of vidding.[3] Those who felt it was possible to have both, often found themselves drowned out or forced to pick sides.

As one attendee argued: "I think this is the real reason why there's been so much ever-increasing strife in the community recently: That it's the manifestation of a core disagreement about vidding, what it should be, and how the convention should or shouldn't reflect that. As the voice and presence of the new segment grows, so does the drama, as these core ideals clash. I think most people have already taken sides, either vocally or otherwise, and that the rift is growing year after year. Even issues (like the current one) that only seem peripherally related to this rift are turning into massively divisive Events because of it."[4]

The two main issues debated in the weeks prior to Vividcon 2010 fell within the rubric of “accessibility,” both in terms of accessibility to convention programming for attendees with physical and mental disabilities as well as for those fans looking for warnings for the content of the convention programming. These issues had been raised shortly after Vividcon 2009, although little public discussion had taken place since then. [5]

The debate began shortly after Vividcon released its “VividCon Background and Policies!” The convention’s accessibility policies had always been informal as Vividcon was a small fan run event, numbering around 140 attendees. However, possibly in response to the 2009 criticisms, the organizers attempted to codify what had been their accessibility and warnings policies for the past 8 years[6] While the initial response was positive, criticisms were quickly raised both as to the wording of the policy statement as well as to the content of the policies themselves. At least one disability blogger emailed suggestions to the concom as to how they could improve both the wording and the content of the policy.[7] (See list of links below for more details). However, because the discussions ranged over multiple blogging services, it was often difficult to identify a consensus for concrete suggestions for improvement that the convention organizers could implement.

"As elynross indicated in her initial announcement, VividCon welcomes comments and feedback on the VividCon Background and Policies statement. We would like to express our gratitude to those who have taken the time to make a comment or write to us about their concerns. We are aware of a small number of conversations happening in non-vividcon public posts, but if there is a publicly viewable conversation happening in your journal or blog or elsewhere that you think we ought to be aware of as we undertake this policy review, we would appreciate you dropping a link to it in comments here or emailing it to access@vividcon.com, please. We take the issues that have been raised very seriously, and we want to know what's being discussed so we can use that information to improve the VividCon Background and Policies statement."[8]

In an attempt to help shape the wide ranging discussions into something that the convention could use, astolat, a former Vividcon convention chair, offered to host an informal discussion in her blog, although she stressed the discussion was informal only and would not be setting policy.[9] While the moderated debate did lead to numerous concrete suggestions, it also revealed that some fans critiquing the convention had never attended Vividcon – or in fact any convention – and lacked background on the mechanics of organizing a small, all volunteer, fan run convention.[10] This led to occasional mis-communication between various parties with one side expressing confusion over what they saw as impractical suggestions and the other expressing unhappiness with what they saw as active resistance to their suggestions.[11] An additional complicating factor was that some of the suggestions (ex. That the convention post warnings for every vid prior to the convention) were difficult to implement given the short time frame.[12]

Further information about the debates and the specific issues discussed can be found here. The issues presented were complex and the discussion far ranging and scattered. This list is meant to offer a representative sample but cannot summarize the entirety of the debate. Additional links welcomed.

Even given the short time frame the convention was able to implement some of the suggested accessibility suggestions:

Other suggestions that were not implemented until the following year (2011)

Suggestions that, as of 2011, have not yet been implemented

An attendee, anoel took extensive panel notes that can be found here[23] Kass did the same.[24] 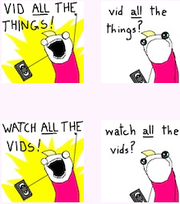 icons based on the meme that was used as the structure for the 2010 Vid Review panel: "Watch All The Vids!". Icons by xenakis

After Morgan Dawn had provided informal vid show playlists with the help of many other volunteers for 6 years, Vividcon began offering linkable spreadsheets after the convention to allow non-attendees a chance to watch the vids shown at the convention. The lists below were collated by par avion.