From Fanlore
(Redirected from Star Con (US convention 1))
Jump to: navigation, search 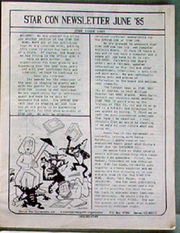 This con had a newsletter called "Star Con Newsletter." It is unknown what the dates of its print run was. 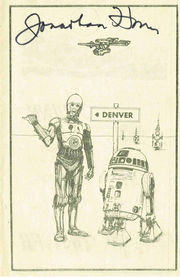 the front cover of the 1978 program book, this example has Jonathan Harris' autograph

The skit was, Stark Wars, a parody of Star Wars and was included in the zine The Plays of Star Con Denver.

The guests of honor:

It was chaired by Jim Donnelly, KathE Donnelly, and Karolyn Popovich.

The program book was 24 pages long. 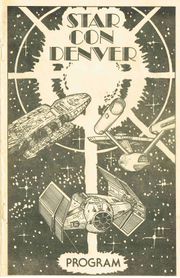 front cover of the program book for 1979

The skit was Battlestar Galaxative , and it was later printed in a standalone zine and in "The Plays of Star Con Denver". 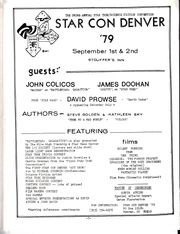 There was much Radio Program (old science fiction and horror) programming.

Star Con Denver 1980 was held in Denver at Stouffer's Inn on August 30 and 31. Confirmed guests were Bjo Trimble and Walter Koenig. One play was a parody of of ST-TMP ("Star Trek: Where Nomad Has Gone Before") that was included in The Plays of Star Con Denver.

This is the fourth Star Con I have attended and to my delight I find each year they keep getting better and better! This years guest list included Walter Koenig, Mark Lenard and Kerry O'Quinn. The convention was held at the Denver Stouffer's Inn which probably has the best convention facilities I have ever seen. Everything is all in one area so there aren't any elevators to mess around with. Saturday program book. The wait in the registration was short (gratefully) as the con organizers seem to have made sure that there were enough people at registration to take care of everyone quickly. The program book and schedule outlined the many events offered and I could see that it was going to be a difficult choice deciding what to see first. I found the 'special effects presentation' done by Kevin Atkins and John Davis a fascinating trip into the world of illusion. Not only did they tell us how holograms are achieved, but how the various effects done on the screen are accomplished. Mark Lenard was a fascinating speaker and told the audience some interesting 'behind the scenes' stories about his experiences on the Klingon ST:TMP set. Never having seen or heard Walter Koenig speak before I was very impressed with how easy he talked with the audience. He had some terrific stories to tell about the filming of the movie and I found the same sense of humor that I had enjoyed in his book "Chekov's Enterprise" present in the incidences he was telling us. Mr. Koenig definately made me a fan of his! Kerry O'Quinn was a genuine surprise to me. I'm not really sure what I expected — some stuffy old man maybe, but Mr. O'Quinn certainly wasn't that! He brought with him a slide show presentation plus some special effects shorts. One that sticks out in my mind as being really good was titled "The Wizard of Speed and Time". Mr. O'Quinn made himself readily available for questions and was a very easy going person to talk with. Saturday evening there was a costume contest that featured everything from a small version of Yoda to a Robot named Greebley that actually shot fire from his top. But probably one of the events I enjoy most about the Star Con conventions is the annual play done by the people putting the convention on. This year the group did an original play parody of the Star Trek movie called "Star Trek: Where Nomad Has Gone Before". We got to see the Starship Enterprise battleing with V'Gin! V'Gin turns out to be a vehicle sent out by the EPA (Environmental Protection Agency) to find planets untouched by smog and such and bring back clean air to Denver. (VGin stands for Virgin, by the way) These people call themselves amateur actors but the amount of polish and quality that goes into their productions (this is their third play parody) shows that they have a professional additude towards their plays. The convention had many other events offered like a Trivia contest, old time SF radio room, filk sing, and more. The convention ended Sunday evening with a fantastic Laser Light Show that was put together especially for the convention by a group called Unique Light and Sound. It was the perfect ending to a very packed two day convention! I understand that there were 1200 people attending this years convention and I can well believe it. I am really looking forward to next years con!! [1] 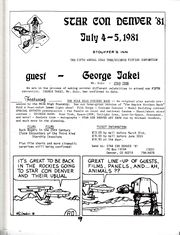 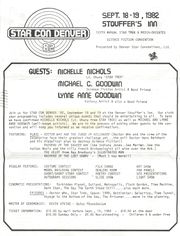 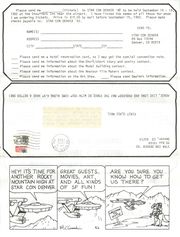 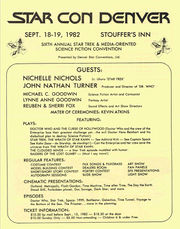 One flyer lists these plays:

DOCTOR WHO AND THE CURSE OF HOLLYWOOD (Doctor Who and the crew of the Enterprise face their greatest challange yet...the evil Doctor Hans Reinhart and his diabolical plan to destroy Science Fiction!)

RAIDERS OF THE SAUCED ARK (See Indiana Jones..See Marian..See the rotten Nazis and the silly French Archaeologist all wine over the Ark.)

Another flyer lists these plays:

DOCTOR WHO AND THE CURSE OF HOLLYWOOD (Doctor Who and the crew of the Enterprise face their greatest challange yet...the evil Doctor Hans Reinhart and his diabolical plan to destroy Science Fiction!)

THE CLOUDED MINDS -- a Star Trek episode muddled with humor.

Guests of Honor were: 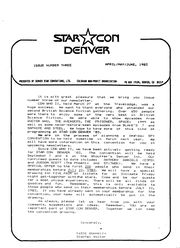 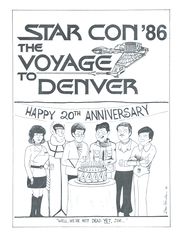 This con had a "Computer BBS Forum. A round table discussion hosted by Jay Melnick, sysop of the Colo Snow Bank BBS. Topics will include current trends in information transferal, ethics and the legal ramifications of running your own Computer bulletin board." There was also a surprise birthday party for Walter Koenig, a trivia contest, and a costume contest.

Koenig's zine, It Ain't the Lollipop!, was sold at this con.

The program book (16 pages) had many humorous articles, three poems and two short stories (winners of a contest).

I remember when we did the very first STAR CON, we had no way of knowing that 10 years  later we would still be doing this. When we  received the first phone call after our first  convention, Joyce Thompson answered the  phone "STAR CON 1982, can I help you?" We  all had a good laugh, since 1982 seemed so  far away. Well, she's still answering the  phones, but she doesn't speculate anymore on  when our next convention will be.

It hasn't  always been easy - I'll never forget the time  that I had to tell several hundred people that  Mr. Kelley would no longer be able to sign  autographs. Yes, I'd say they were a little  upset. Or how about the time we had the worst snowstorm of the year the day before  our convention - our guest couldn't get into Denver because the airport was closed and  convention attendees couldn't get to the con vention either. That convention was MicroCon  (which is was) and it taught us to never plan  convention for the month of January again.  Does anyone out there remember when we did  GUMBY RAIDERS? 'Nuff said!

But for every awkward or bad time we've had, we have managed to have three times as many good ones. With all the wonderful memories we have of  past STAR CONS why then are there only six  original STAFF MEMBERS left to share them  with? Call them die-hards, call them responsible, but I call them whenever it's time for another convention. Thank you. Joyce, Phil, Kevin, Angel, Dan and Debi. Also  a special thanks to Michael and Stephen who  were four years old when we first started and  have grown up answering the phone "STAR CON  DENVER, MAY I HELP YOU?" They've had to learn, sometimes the hard way, that S.I.A.W.O.L. (STARCON IS A WAY OF LIFE) .

Someone who deserves special recognition is  my sister, Karolyn. She is one of the found ing board members of STAR CON and she is  still involved (in her own way) with the con vention. Of course, without all of you the  conventions wouldn't even be possible.  Thanks for sharing all the fun with us. How  does STAR CON 1999 sound to you?

Star Con Denver 1987 was held in Denver in March.

Richard Chavez (Ironhorse from War of the Worlds) was a planned guest. 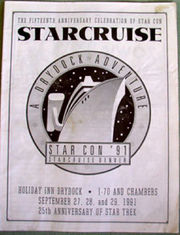