Fanfic by cmshaw is a website with fanfiction and recommendations by cmshaw. It was originally hosted by GeoCities and moved to SlashCity.net where it went live on 22 March 2001. The site was born again on SlashCity.tv on 5 August 2001 and returned to slashcity.net on 25 November 2001. 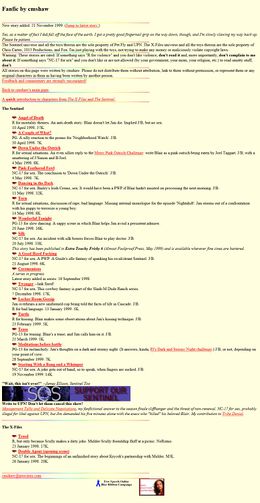 The recommendations were last updated 1 November 2002.

Have you hugged your fanpusher today? This is a semi-organized, semi-annotated collection of fanfiction that I like. Originally much of it was Sentinel, most of it still is slash, and a lot of it will probably always be NC-17, but I won't always note what's what -- wherever possible, I'll let the authors speak for themselves on pairings and warnings and such. This page will not be organized by fandom, pairing, or anything else so popular, but rather by my own internal categories. All categories are subject to continual update, as are my comments about any of the stories listed. Those comments (when I make them coherently) will dwell on why each story caught my attention. Maybe your tastes are similar to mine. If so, why not write me and tell me what you like? Fair's fair, you know. For those of you wondering how I'm handling linking to the stories I'm rec'ing here, well, I wonder that myself sometimes. I've pretty much decided to link to author's pages where possible, trying to set you down within one or two really obvious clicks of the actual story. When I do that, the link should be off of the author's name, and the story title that you need to be looking for will be in italics. Where I can't do that, or where the author doesn't have a website, I'll link you in directly to the story in an archive somewhere; that link will lead off the story title, although I'll still underline the author's name. (It took me a while to work out this system, so some links may be unexpected.)[2]

The site had an extensive fanfic glossary[3] that is still available at ReoCities: