Explicit sex stories in general, especially in anime fan fiction, are known as lemon, a term which comes from a Japanese slang term meaning "sexy" that itself derives from an early pornographic cartoon series called Cream Lemon.[1]

While still most prevalent within anime fandom, the term "lemon" (and other associated citrus fruits) has since become established as a pan-fandom code for various types of smut, particularly as sites like Fanfiction.net and Tumblr have cracked down on adult content. Most recently, it experienced a resurgence on Tumblr following the NSFW Content Purge of late 2018.

How has the use of the term grown and diminished over time? Was there a "peak lemon" period?

TV Tropes has this to say about the spread and usage of "lemon" and related terms over time:

In the late 90s/early 2000s, the term Sekkushiaru Roman came into use for the overtly romantic style of lemon.[3]

I vividly remember the first time I read something marked "lemon" it was a terrible Inuyasha fic on an Inuyasha specific fanfiction site in which Inuyasha died and was resurrected by his father solely for the purpose of banging Kagome and having six annoying "pups" with her of varying technicolor hair colors. I was revolted and yet because I was eleven I couldn't stop talking about it to my friends. And then we found fanfiction.net[4]

Yeah, and I remember seeing it on anime fic going back to usenet and personal archives in the 90s. Fandom didn't begin with ff.net.[5]

Downloading shitty AMVs from the AOL fileserver. Mailing lists. Webrings. The SOS fansite, trips to Toys R Us to raid the trading card gatcha machine, the dying days of alt.fan.sailor-moon and my first con where I saw fansubs.

Tons of fanfic and probably the first lemon I ever read, the bad fandubs and radio dramas we all tried to make, the fanart we sent to fanfic writers who would host it on their sites...[6]

Many fans date their first encounter with the concept of "lemon" to 2012 (or believe the concept originated in 2012), pointing to a potential resurgence at that time which could be linked to Fanfiction.net's second major purge of NC-17 content which took place in that year.

The humorous Tumblr post "I feel like fandom generations are both very specific and easily conflated.", published in December 2018, included a generation dubbed "Citrus Cheesecake" (in between "I was there Gandalf" and "Archive of Our Saviours"). Some of the defining traits of this "generation" were listed as "DeviantArt and ff.net" and "“more of a lime than a lemon >//< but also kind of just a lemon with fluff?”"

Additionally, the subsequent generation "Archive of Our Saviours" included the traits "ratings that had nothing to do with fruit" "(thank gods)".[12]

In early 2019, due to Tumblr blocking NSFW tags, some Tumblr users brought back #lemon and other citrus terms to tag their NSFW content instead.[13] 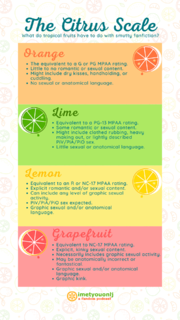 I Met You On LJ posted an infographic for The Citrus Scale in 2021. Their logo is also based on the term "lemons."

While "lemon" on its own was the most widespread term, fans developed a range of variant terms to describe different levels of explicit content contained within their stories, all oriented around citrus fruits. The definitions of these can vary, either because fans' recollections are unclear or because there were different conventions used by different groups of fans. This system has become collectively known as 'the citrus scale'.

Lemon and lime, used to refer to explicit sex and to "smutty" content that stops short of actual sex respectively, were the most widespread and their definitions the most widely-recalled and agreed upon. Fans disagree, however, as to which other fruits make up the Citrus Scale (if any) and whether these terms were really used by fans or just existed in theory.

From The Fanfiction Glossary:

"Lemon" comes from the title of an anime called Cream Lemon, which is PWP in animated form. As far as I am aware, "lemon" refers and has always referred to any kind of explicit NC-17 sex in a story, and not specifically to F/F. Other shades commonly used in anime fandom are

From the Protectors of the Plot Continuum wiki:

1. Citrus
Citrus is used to describe the most mild interactions on the scale, such as a romantic hug or a kiss on the cheek.

2. Orange
Orange is used for kissing, hugs, and some more touching beyond that that begins to have a hint of sexuality.

3. Lime
Lime goes further into the sexual, with heavy making out and possibly some light groping. Some might not have these, but rather qualify as a lime for hinting at lemon-scale action.

5. Grapefruit
Occasionally, a fifth fruit (well, fourth, since citrus itself isn't actually a single fruit) is added. It is generally said to be the X-rated or truly bizarre lemons, but it is not widely used.

In 2019 when the Citrus Scale began its resurgence on Tumblr, Tumblr user xChrononautx posted a "PSA" about the return to the citrus scale:

However, many horrified fans pushed back against this interpretation of the scale, insisting that orange represented very mild or non-sexual content:

NO FOR THE LAST FUCKING TIME! GRAPEFRUIT IS WEIRD FET SHIT/EXTREME. ORANGE IS FOR SFW[18]

We definitely do not want people tagging kinky stuff as oranges.[20]

After the post went viral (with many additions, corrections and recollections) xChromonautx posted a follow-up:

My entire inbox is full of people who have their own interpretation of how this scale functions. So my cyber friends, it entirely is down to interpretation and some internet cryptids who are yet to tell me their secrets (maybe seth will weigh in on this mess, hes the god of tumblr right?)

In 2020, the Organization for Transformative Works made a limited-edition sticker set featuring the Citrus Scale available as a thank-you gift for donations of $40 or more.[23][24] The sticker set featured Orange, Lime, Lemon and Grapefruit.

Some fan communities or fan sites have particular associations with the term lemon and related terms, due to either being anime-centric or hosting a high proportion of anime fanworks. lemons_and_desiresRK is one example of a Rurouni Kenshin Yahoo! Group, focused on discussion of NSFW fanworks, that used "lemon" in its name.

Fanfiction archives that used the "citrus scale" included Noire Sensus and other sites that included both anime and western fandoms.

The popular quiz site Quizilla, which was home to a great deal of anime and manga fanworks, had a long and involved history of using lemon-related terms to avoid having explicit fanworks removed from the site.

After the site's official closure in 2014, a former Quizilla user created a Reddit thread to reminisce,[25] and many fans fondly remembered the use of "lemon" to denote smut.

I just went to search for it, after years of being away, and I'm officially heartbroken. My naive 15-18 year old self learned SO much from all the lemons. LOL

Oh god, lemons. And limes! I remember reading a few that even specified "just kinda lime-y, not full lime or lemon though!" Apparently there was some scale of citrus to show how sexy it got?

I wonder if teenage girls new to fan fiction know that term, or if it's specific to people who discovered fan fiction on sites like Quizilla and fanfiction.net that technically forbid pornographic scenes so teens came up with terms like lemons to get around the filters but let others know what was going down in their fanfic. 'Cause I haven't seen that term since … shit, I don't even know when. Before fic migrated to live journal, that's for sure.

I'm a guy and I know that term... but I first saw it on fanfiction.net lol. Never wrote one though (edit: that was a bit ambiguous i actually meant i've never written a fanfiction let alone a lemon)

In response, the original founder of Quizilla, Matthew Nielsen (aka xunker) weighed in with his personal recollection:

I will go one step further: I started the site in August 2002 and it wasn't until probably late 2003 that I learned what that meant. A whole year of blissful ignorance.

No bones about it, Quizilla had a problem with that kind of content. I dutifully removed it when it was reported or automatically flagged, but if nobody reported it or they used words I didn't know about, well.. let's just say that I, 24 years old at the time, was regularly being outsmarted by 14-year-olds.

I think I learned what it meant when someone sent me a message asking me to "please get rid of all these lemon stories!" Thankfully, when I naively asked them what they didn't like about that particular citrus fruit they explained it all to me.

Thus, an arms race started: when I started automatically flagging quizzes if the title contained "lemon", they switched to "L3m0n". Then to "nomel", "lemonade", "limon", "lémón" and a dozen others I can't remember anymore.

The automatic filters got better and we later added volunteer moderators to seek it out and remove it, and that helped a bunch, but I can guarantee that people found ways around all of it. When you're young, you've got two never-ending resources: tenacity and time.

While "lemon" as a fan term evolved largely as a way to evade purges of explicit content on fan websites, making it unnecessary on a purposely inclusive site like AO3, the term is nevertheless used as a tag on a number of fanworks.

The earliest snapshot of the lemon tag on the Wayback Machine, taken on July 6, 2010, shows just 7 works in the tag.[27] This is likely due to the much smaller number of works on AO3 at the time, but may also be because anime fandoms were less represented on AO3 in its early days. Fandoms containing fanworks with this tag in 2010 included Yu-Gi-Oh!, Gundam Wing, and Dragon Age: Origins.

Fans have recalled the Citrus Scale being widespread on Wattpad from the mid-2010s onwards, with some stating that the system has remained in active use up to the present.

I remember when I first joined Watpad about 3 years ago the citrus scale, or at least Lemons and Limes, were still pretty common, still are actually. Anyway, I figure I’d reblog for my more sinful followers.[29] 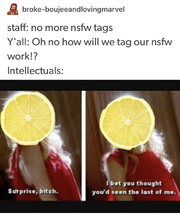 The fandom community on Tumblr had little history of using the term "lemon" prior to early 2019. In the wake of the Tumblr NSFW Content Purge, Tumblr users realised that any post tagged "NSFW" or similar was being automatically flagged and removed, and so looked for another way to label smut and adult fanworks.[30] A number of users independently landed on the idea of reviving the "citrus scale" on Tumblr to avoid the site's filters.

Aite, so I’m taking a leaf out of the old playbook and tagging all the N*FW content on this blog as #lemon

We’re going old school. Blacklist it if you’re not up for the #lemon[31]

It wasn't long before "lemon" was trending on Tumblr. Tumblr users who had been in fandom long enough to remember the Citrus Scale reacted with a mixture of glee and horror.

[fan comments to be added]