Q is an alien recurring character in Star Trek: The Next Generation, Deep Space Nine and Voyager, played by John de Lancie.

The character was named after a fan, Janet Quarton.[1]

Q is a representative of a godlike race, also called the Q, and plays a trickster archetype. Despite being a close-to omnipotent being, he almost always presents in the same middle-aged male body and comes across as less mature than Wesley. He has a thing for captains, flirting with Jean-Luc Picard and stealing his girlfriend, and coming on to Kathryn Janeway. He also has an unexplained history with Guinan, which leaves them deadly enemies.

Other canonical Q entities, all confusingly also known as Q, include:

Q is perhaps the most popular recurring Trek character, with his own newsgroup, alt.fan.q. His popularity went beyond Trek fandom -- he even gets a name check on Buffy the Vampire Slayer!

Alara Rogers on her changing perspectives on the character:

Immediately I decided that I hated the character of Q. He was a ripoff of two or three different Classic Trek concepts -- I counted Trelane, the Metrons, and maybe the Melkotians as well-- and the concepts hadn't been that great the first time. Godlike being puts humanity on trial for being too warlike. Oh, spare me. Q was pompous, arrogant, hypocritical, and apparently none too bright, and I was deeply annoyed with the show for trying to tell me that highly advanced beings would behave like that. ...

...So I watched the Q episode [of DS9], and discovered something shocking.

He was still arrogant, but now it was clear that he was supposed to be an asshole, that he wasn't emotionally a superior being at all, and that that was the point. Q is the guy, in D&D terms, with the Intelligence of 18+ and the Wisdom of 3. He's an arrogant, overbearing, obnoxious jerk who, unfortunately, really does know everything. The character was far, far funnier than I remembered. ...

Rather than being the mere plot device (and a ridiculous one at that) he was in the first episode of TNG, I found that Q was actually a character who changes and grows over time throughout his appearances on the series. Unlike every other godlike alien Classic Trek, or even TNG and DS9, presented us with, Q is just this guy. He's not merely a foil for the good guys to prove how moral, how smart, or how agnostic they are; he's a character, a person in his own right. And while his species is obviously very different from ours, it's clear that emotionally, they're pretty damn similar. Which isn't all that likely, but what the hell, it's TV, I can suspend my disbelief.[2]

Atara Stein on an early Q episode, 'Hide and Q':

Fortunately for his subsequent appearances on the show, de Lancie establishes some interesting facets of Q's demeanor that will provide significant material later. One is simply the energy of his performance, particularly given the stilted lines he is given. ... He is such fun to watch, particularly in Q's confrontations with Picard, that he had to be brought back in some fashion. This episode also subtly (or not so subtly) establishes Q's polymorphous sexuality. His demeanor toward Riker during their conversation on the planet is campy and seductive; he draws close to the first officer, invading his personal space and giving him a series of low-lidded seductive looks while speaking in a bedroom voice that incongruously undermines the pretentious dialog about human evolution. One viewer, who had never seen a Q episode before, watched a minute or so of this scene, then asked, "Is Q gay?" Q's smile and tone of voice with which he delivers the line "You're gonna miss me" is far more flirtatious than

Alexander V. on the appeal of Q:

The universe isn't like that. There are no 'good' and 'bad' guys. I

personally think that's why Q is on the show. On one side you have all those Federation boys who think they know EXACTLY what is right and what is wrong. And the other side you have Q who is a 'bad' guy (But only to Federation standards), but he shows that things like 'good' and 'bad' are just personal

Q shows that our human standards

are not the only ones. They might even be wrong. In fact they

A lot of fans could only explain Q's behaviour by assuming he was in love with Picard; Picard/Q gained a devoted following to become one of the major TNG slash pairings. Janeway/Q failed to have the same popularity, with many fans considering the pair had no chemistry. Q also gets paired with many other Trek characters, including Paris, Bashir and Data, not to mention droves of original characters who often score highly on the Mary-Sue scale.

Non-explicit Q fanfiction frequently explores Q's true nature and how it differs from the human experience, often in the context of a trusting relationship with another character. Q is sometimes included in ensemble adventures (occasionally for Trek series in which he doesn't appear), usually as a generic villain or as a plot device for time or dimensional travel, or the like.

Fanfiction starring Q often imitates episode titles by using Q in the title, for example, 'EsQPade' (Brenda Antrim) and 'Another Turn of the Q' (JoAnne Soper-Cook). 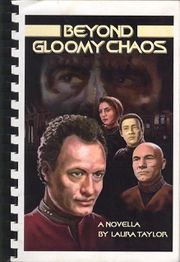