Spike is a vampire from the Joss Whedon TV shows Buffy the Vampire Slayer and Angel the Series. He was played by James Marsters.

Spike was an enormously popular character. Although people had been writing about him ever since his introduction in season two, Spike-centric fanac exploded during season five, with his shift from comically obnoxious antihero to lovesick woobie (evil woobie, thanks very much. but still: woobie.). This change in his function on the show, and every subsequent change for the next four years, provoked vast amounts of angst, joy, wank and fanac. Fans were compelled by Spike's slow, fraught shifts of allegiance, and argued vigorously about whether a soulless vampire could ever really propel himself into redemption.

In season five, Buffy/Spike emerged as a potentially serious canonical rival to Buffy/Angel. This resulted in the Bangel vs Spuffy ship war.

Within the Spike fanbase, there were two distinct groups of fans. Some fans, known as Redemptionistas, liked Spike's story of redemption and the others, the Evilistas, preferred to explore his evil side. These terms were in fairly widespread use before there was any hint of Spike's redemption arc in canon, and early theories focused on his ability to be redeemed when he lacked a soul. There was very little discussion of the possibility of Spike regaining his soul, as this appeared highly unlikely. According to the fandom glossary on Tabula Rasa:

Evilista: To an Evilista, Spike is forever owned by his basic vampire nature. He is unable to change, learn or grow, because he lacks a soul. He is eternally evil, unredeemable, forever and ever, amen.[1]

In early seasons some show writers showed a noticeable preference for Evil Spike on public discussion forums, on which they interacted with fans. Writer David Fury was dismissive of any storyline which could result in a less evil Spike beginning a romance with Buffy, and some fans viewed his comments as insulting towards Spuffy shippers and redemptionistas.[2]

In fact it seems that a sizeable number of Redemptionistas were also early Spuffy shippers, who wanted to see a romantic relationship between Buffy and Spike, which would be impossible without a redemption arc.

On the fan side of things, the Evilistas (as they were called in those days) felt that the writers were on their side, and felt justified in attacking the Redemptionistas in similar terms. This is why the Bloody Awful Poet Society mailing list, which was founded at about this same time, grew to be the fannish monster that it did: for awhile, it was one of the few online spaces where you could talk about Spike or Spuffy without being attacked. (As Spuffy got more popular, several other Spuffy boards were created. All long dead now.)[3]

The pairing of Spike/Xander also resulted in fics that were more redemptionist in tone, but many of these fans preferred not to be associated with Spuffy Redemptionists.[4]

St. Spike vs. Buffy the Bitch

Season six was when Spike's relationship with Buffy became canon but the way their relationship developed (to some fans) left much to be desired. The character shift during that time was a source of much debate (in the fandom, as well as among Buffy/Spike shippers).

A certain tendency in fanfic could be noticed during that period where Spike was depicted as self-sacrificing (even before the soul), doing the right thing kind of guy, whereas Buffy was portrayed as more unstable, abusive partner. The tendency to portray Buffy as abusive was most common in fics pairing Spike with another, more understanding character. This was usually either Xander, who fans also believed was overlooked or abused in canon, or Angel, who understood Spike was not to blame for his terrible deeds because he was a vampire without a soul. However even in works pairing Buffy and Spike, the Scoobies could be portrayed as abusive towards Spike, with Buffy learning the error of her ways as the two embark on a romantic relationship. The portrayal of Spike in fics was a source of much discussion.

In fanfic, mostly written by Spike fans, we read many plots with a strange woman appearing during S5 or S6, telling the Scoobies how horrible they are to treat Spike that way, and that they should apologize to him. Usually these stories tend to erase Spike's mistakes and put full focus on the Scoobies' not so pleasant moments. The story ends with this woman fixing all the characters' issues and everybody live happily ever after with Spike ending up with either Buffy or Xander. Depends on the story: Spuffy or Spander.[5]

Spike, on the other does tend to become Saint!Spike. I think the difference between woobiefication/Marty Stuing and canonization is this: Spike's "flaws" don't go away nor are they ignored. Instead, those flaws are turned into "positives" for the character and are excused or handwaved.
They are fluffed off as being unimportant because: 1) he's a vampire and everyone knows that vampires are better than humans; 2) he's not really bad he's just built that way; 3) all the other Scoobies are, of course, worse than Spike because Spike "can't help it" without the soul while they "can help it" with their souls (leaving aside that this group tends to never give the Scoobies any slack for human failings...ever); 4) of course all demons and vampires are coded as "minorities" and therefore (meta-lly speaking) the Scoobies must be racists for killing demons and vampires, which, if left unchecked, would eat them and their neighbors.[6]

In the years after the show ended, there has been a tendency to portray Spike as the abuser rather than the abused.

While I loathe the fanficy St. Spike, where all of his S6 choices were Buffy’s fault, I also feel equally frustrated with the Tumblr St. Buffy, where all of her S6 choices were Spike’s fault. Because she did some seriously messed up shit to him and to deny that or blame it on him or suggest that he had it coming makes me every bit as uncomfortable and squicked as the inverse.[7] 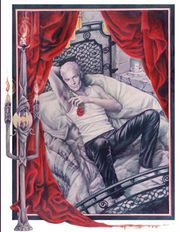 "But for the Thorns," an undated illo by Suzan Lovett

Spike and his Soul

After Spike earned his soul at the end of season six fandom, responded with A LOT of fanfic. Even before season seven premiered, fans wrote fics (in major part basing Spike's possible reactions on Angel) about how Spike deals with the soul. When the beginning of season seven showed Spike insanity as a result of getting back his soul, fanfic writers responded with a lot of Hurt/Comfort fics.

In the comics, the mini-series, Spike, by Brian Lynch, reignited debate about Spike's redemption and the role of his soul in that redemption.[8][9] In the series Spike's soul was removed, but the character remained good, and did not revert to his evil ways. This was something Redemptionist fans had wanted back in Season 5 and 6; evidence of a soulless redemption.

But regardless, all the usual arguments have broken out, and the forums are aflame with Spike-haters saying that the capacity to do good without a soul proves Spike is THE WORSTEST MOST EVIL VAMPIRE EVER, and Spike fans saying that now his journey has been COMPLETELY INVALIDATED AND THE CHARCTER IS RUINED, and other Spike fans saying that despite Joss's supervision and approval of Lynch's script NO WAI ITS NOT CANON and yet other fans wailing OH NOES IF VAMPIRES CAN BE GOOD BUFFY IS A MURDERER! The arguments are largely straw men and false dualisms [10]

Spike is the little black dress of Buffyverse fandom. He's been paired with everybody from Joyce Summers to Mr. Gordo[11], and a zillion crossover characters besides. Based on works on Ao3, his most popular ship is Buffy/Spike[12], two other most popular pairings - Spike/Xander[13] and Angel/Spike[14] - are following far behind. However much of the works produced in this fandom were originally housed on personal sites, Livejournal and a multitude of unconnected archives. As a result, Ao3 stats may not give an accurate representation of the popularity of these ships. There are substantial bodies of work pairing him with Tara, Illyria, Drusilla, Wesley, Willow and Giles. [15] See pairing pages for overviews of pairing-specific trends, influential authors, etc.

Spike-centric gen often explores his history before he came to Sunnydale, his brotherly relationship with Dawn, or his struggles with his self-identity and moral code.