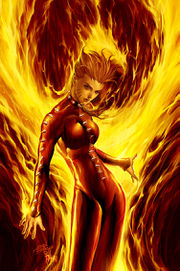 Rachel Summers is the alter ego of Phoenix and Marvel Girl from the Marvel Comics series The X-Men. She has appeared in several X-Men Comics universes, mainly Days of Future Past and Earth-616.

Rachel Summers is a mutant born with telepathic and telekinetic powers. She has bonded with the Phoenix Force.

Rachel first appeared in The Uncanny X-Men #141 (January 1981). Rachel has yet to appear in the X-Men Movieverse. She makes an appearance in her Hound outfit briefly in X-Men: The Animated Series[1].