Some Facts About the 2013 Convention 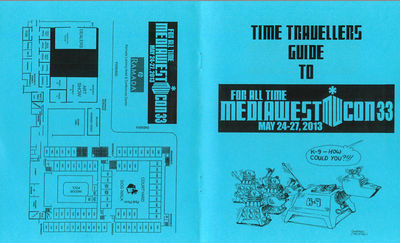 the program book is available as a pdf

There appears to have been no skits.

There were no nominations for the Fan Fund.

The Shoes Make The Hobbit Award

The Sometimes the Sequel is Better Than the Original Award

The Move Over Mr. Steed Award

The OMG I'm So Glad I Talked Spencer Into This Award

Winners were judged by popular vote at the convention.

From the post-con report: "Due to technical difficulties and a lack of voter participation, there were no FanVid awards"

According to one attendee, there were technical issues that prevented about 1/3 of the Gen vids and 1/3 of the Slash vids from even being shown during the Friday Night Premieres. The vid show organizer did attempt to show the missing vids later, but without posted schedules, few people knew when to show up, and fewer people attended either of the subsequent showings. The convention also did not post a playlist of the vids that were shown. Because of these issues, voting for 2013 was abandoned. "2013 vids may potentially be eligible again in 2014, if shown retrospectively, or 2013 may just simply be a wash."[3]

From the first progress report:

As most of you know, since the Holiday Inn South was sold and became CWB and BWPL, there have been ongoing communication problems, especially in regard to reservations. During MW*C 32, the rooms assigned for Con Suite and Party Suite were changed from what we had been told (and had in the Program Book), which may have been a result of infighting among hotel staff. Then there was the nasty note the owner had slipped under members’ doors instituting a charge for “moving furniture,” and the owner made several last minute changes to the early reservation request procedure that we did not have time to discuss, much less agree to. There were also numerous problems with housekeeping, restaurant, etc.. BWPL representatives attended the dead dog panel and heard complaints, which we had hoped was a more promising sign.

Since MW*C 32 all we had was a proposed contract for MW*C 33 which made a number of unacceptable changes (such as slashing the credit for rooms used by members). After the con, there were hotel management/staff changes that we were not informed of, nor did anyone contact us to get a contract signed, and it was sometimes difficult to find who we should be talking to as it appeared no-one was specifically assigned to our account. We nonetheless had been operating in good faith in gathering reservation requests, etc.. In addition, we were given to believe that the owner took us for granted to the degree that he was unwilling to negotiate (as was demonstrated in raising the room rates again). As a precaution, we began a contingency plan with Ramada as an alternative location.

As you may already know, we also had some difficulties with settling the bill for MW*C 32 with BWPL, starting with an amount several times what we had expected. When we thought we had finally corrected it down to roughly what we paid last year, BWPL stopped answering our e- mails and phone messages.

We still don’t know why they stopped responding, whether it was further evidence of disorganization there or intentional.

After more than a month of unresponsiveness, we sent a check (return receipt) in September for the amount we believed to be correct (based on what information they had provided) along with a letter noting the lack of communication. When we got no reply to that letter, the lack of communication had reached a point beyond futility, so we felt we had little choice but to send another letter (return receipt) informing them that, given the total lack of response, we did not see how we could negotiate a contract for MW*C 33 and we would, therefore, be holding MW*C 33 elsewhere.

We still did not hear anything from BWPL after that until we were well into serious negotiations with Ramada, and even then the BWPL owner was clueless about both the trouble settling the bill and that we did not have a signed contract for MW*C 33.

Shortly after that, it was reported in the local paper that the U.S. Department of Labor has ordered the owner of BWPL to pay $162,147 in back wages to more than 700 current and former employees and that a former sales manager was suing the hotel.

In October, we had a phone message from someone at BWPL who apparently still didn’t know either that we had no contract or that we had told them we would be holding MW*C 33 elsewhere.

Naturally, there were additional delays due to having to negotiate two new hotel contracts and get both hotels up to speed. We apologize for those delays in getting the hotel confirmations out, but, hopefully, we will have fewer problems with the new hotels in the future.

We had an additional call from someone in sales who apparently still hadn’t gotten the message we weren’t coming back.

January 29, 2013 we got another bill by FAX, and replied by FAX that we had sent them a check in September, that it was cashed, and that this sort of confusion and disorganization is a large part of why we weren’t coming back this year.

Comments the Organizers, from the Post-Con Report

Thanks to MW*C staff members who work all year round and to the GoFers and other volunteers who make MW*C possible!

Due to difficulties with the old hotel, MW*C 33 was held at the Ramada Lansing. Obviously, the hotel changes required some adjustments. Overall, people seemed to be pleased with the new arrangement, albeit in a smaller space.

The last few days leading up to the con were made even more hectic as it was discovered the Ramada had incorrect arrival and/or departure dates for some members (including staff members and Lori & Gordon). Apologies to those affected by these issues. Naturally, none of us needed such problems, especially so close to the con.

Surprisingly, no-one contacted us or MW*C Hotel Liaison Carol Lynn directly, which would have enabled us to address the problem sooner. Instead, people posted to social media, sometimes with misrepresentations and erroneous claims, causing confusion and panic.

For those who are not clear on the point, Carol is our MW*C staff person who deals with the hotels on behalf of members. Carol worked hard with Ramada to resolve the issue for those few people actually affected once she became aware of the problem. The Hampton Inn (the MW*C official auxiliary hotel) had no such issues, and was most helpful in dealing with the problem.

We still don't know exactly why there was a disparity between the information given the hotel and the information as it ended up on their computer, but steps have been taken to avoid any repeat of this problem. There was no "block of rooms" canceled, nor did the convention change anyone’s arrival/departure dates. Some people were apparently confused as to which hotel they had reservations for, and some people apparently were the cause of their own problem when they discovered they had duplicate reservations, and inadvertently canceled both. Some were simply wrong about what arrival date they had put on their form.

There was also some confusion as Ramada's definition of suite is apparently different than what people expected (their suite rate does not include adjoining rooms). We did take measurements of a suite room and posted them on Facebook before the con.

Naturally, there were some things we did not anticipate, or did not quite go as planned. The layout of the Dealers Room had to be adapted as we did not have precise measurements of the American Room, but they did manage to get the intended number of tables in. There was also a lighting issue around the periphery of the room, which was only discovered during setup. This problem has been discussed with the hotel and, hopefully, will be corrected for next year. A few dealers moved to the hallway, which seemed to work, so we may offer that as an option next year.

We also moved the Game Room (from sharing space in the ‘Zine Reading Room) to a more visible location, which seemed to work well. Thanks to Ericka Kahler for stepping in at the last minute to organize the Game Room! And thanks to Ramada for letting us have that space and holding the free breakfast buffets in the pool area (which also seemed to be well received).

It was also brought to our attention that the hotel firedoors presented a problem for members using scooterss/motorized wheelchairs, which we have discussed with the hotel and think we have a workaround for next year. Also, the company that has long provided the scooters has refused to do so in the future, citing verbal abuse by one member. Fortunately, another company has indicated they are willing to step in for next year.

Comment cards gathered by Carol were passed on to Ramada.

We did not take hotel reservation requests at the con this year. Having needed to make adjustments on the fly for this year due to the unexpected hotel change, we recognized the need to take the time and revise the system in a more orderly way. We now have contracts with both Ramada and Comfort Inn (formerly Hampton Inn) and members will be notified shortly when we have a system in place.

Obviously, this was a shakedown year at a new hotel, so we anticipate things will run smoother next year.