Friends at the Table

Friends at the Table is a weekly tabletop RPG actual play podcast made by members of RunButton.net and StreamFriends.tv.[1] The show's fandom is active on Twitter and Discord. The Friends at the Table Patreon had over 3,700 supporters pledging almost $25,000 per month as of January 10, 2021.[2]

Friends at the Table is an actual play podcast focused on critical worldbuilding, smart characterization and fun interaction between good friends.[3]

The podcast is currently in its sixth full season. The first, third, and fifth seasons (along with a mini-season, 2.5) are set in the fantasy world of Hieron, while the second, fourth and sixth are set in an unnamed mecha-focused space opera universe.

Game: Blades in the Dark

A prequel to Season 1, Autumn in Hieron.

The sequel to Season 1, Autumn in Hieron.

Game: The Veil; Scum and Villainy

A sequel to Season 2, COUNTER/Weight, set roughly thirty thousand years after the events of that season.

The sequel to Season 3, Winter in Hieron.

A sequel to COUNTER/Weight and Twilight Mirage.

Game: Heart: The City Beneath

1.) I love the balance FatT strikes between seriousness and humor. They are very storytelling-oriented, and never let humor detract from the story they are telling. However, they are friends and they act like it, joking around with each other fairly frequently, and they are genuinely funny in their own right. Worldbuilding is one of their 3 main focuses and they do a great job of it. Their other two focuses are "smart characterization and fun interaction between good friends", so they place high priority on both roleplay and banter 2.) I would say that the quality of episodes increases throughout the beginning of Counter/Weight, and then stays pretty consistent up through the present. 3.) My background: I'm in love with The Adventure Zone, and tried up to the start of the second "book" of Glass Cannon, but found it less funny and more straight gameplay-oriented than I had hoped.

Friends at the Table is much more story focused than Glass Cannon was, and about as story oriented as The Adventure Zone during 11th Hour. FatT doesn't have me laughing as much as TAZ usually does, but FatT does have me as enraptured by its story as TAZ did during these last few episodes. A good comparison to draw between the two is that while the McElroys are primarily concerned with doing the funniest thing, the Friends are primarily concerned with doing the most interesting thing. That isn't to say that TAZ isn't interesting, or that FatT isn't funny, though.

I very much love Friends at the Table. I've tried a smattering of different RPG podcasts, and FatT and TAZ are my top two favorites.

There is a good mix of serious and funny, not so much of either one though to make the tone shifts completely unexpected.

I would say that overall FatT gets better with age. I've been listening since early in Counter/Weight (and did go back to listen to season 1 when I got caught up with C/W, it's good if you can get past the audio issues) and I feel that the quality of the RP as well as the GMing get better as the series continues. The music is consistently incredible as well.

I have only listened to tAZ of the four pods you referenced here. Breaking it down I would say tAZ is funnier on a minute to minute basis, while FatT is more of a balance between serious and funny. TAZ is far more loose with the rules. Also FatT does not play D&D, they have played several games in the PbtA family of systems, so if you're looking for more D&D this may not be the right pod for you.

With all that said, I absolutely love both podcasts, they are my two favorites to listen to, both have pulled me into their characters/worlds extremely effectively and I would recommend them to anyone who has an interest in Actual Play podcasts.

Friends at the Table has an active fanart-based fandom on Twitter and Tumblr. 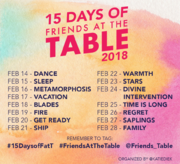 Calendar for the 2018 fanworks challenge #15DaysofFatT.

In 2017 and 2018, Twitter user katiediek organized #15DaysofFatT, a fanworks challenge held over the last fifteen days of February, with daily prompts for the Friends at the Table fandom.[4]

In 2017, a different character was the focus of each day of the challenge; in 2018, there was a different thematic topic for each day.[5] Fanworks were shared on Twitter using the hashtag,[6] and also on AO3.[7]