Throughout fannish history, fandoms have had different levels of involvement with The Powers That Be, the creators of their source texts. This involvement has varied in intensity, taken on several forms, and had differing end results.

Some canon creators have had very positive involvement in their fandoms, while others prefer not to become involved; still other creators take a negative view of any kind of fanwork output involving their creations (see Professional Author Fanfic Policies). TPTB involvement with fandom has also given rise to some notorious incidents (including accusations of copyright infringement, lawsuits and bans on slash fanfiction), some of which had a chilling effect on all fannish output for that fandom.

In the era of social media, TPTB/fan interaction is much more normalised, allowing creators to both cater to fans and create a different set of issues. See TPTB and Social Media.

Refer to TPTB's Involvement with Fandom/Specific Fandoms for some more detailed info and fandom-specific examples.

Exciting Presence or Dampener of Creativity?

... I'm starting to worry about the high profile fandom has achieved because of its visibility on the net, specifically in cease and desist orders from studios who find out about fanzines online, and the chilling effect of members of the productions teams interacting with fans on open lists. But what happens is that fans start separate small lists to get around that, like the B5 [Babylon 5] fan fic group kept separate from the newsgroup JMS haunts. [referring to creator J. Michael Straczynski ]. It's great that fans have so much access to writers and actors and producers online, although any effect on series is negligible, but their presence can stop certain kinds of discussion as essential to fandom as chocolate and cats. Suck-up posts also seem to drive out deeper discussions, maybe no one wants to look too interested in the series (and risk being told to get a life) but many do like to curry favor. This is hardly unique to online fandom, however. [1]

Some fandoms, even very large ones, had very little or no contact with the producers, writers or actors. Some examples: 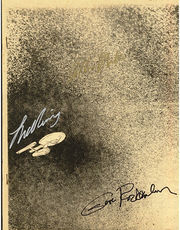 an issue of the 1968 ST-Phile, signed by Gene Roddenberry, Leonard Nimoy, and William Shatner, is an early example of TPTB's knowledge of a zine fandom 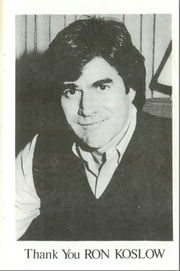 a 1988 thank you from Beauty and the Beast (TV) fans, printed in Once Upon a Time... Is Now #1; many fans were not as thankful two years later: see The Classic vs. Season 3 Split.

While some fans were "required" to send their fannish work to TPTB (See: Open Letter to Star Wars Zine Publishers by Maureen Garrett), other fans directly, or indirectly, voluntarily alerted the original creators of their fanworks. Sometimes this had positive results. Other times, not so much.

The Case of Chelsea Quinn Yarbro and The Holmesian Federation 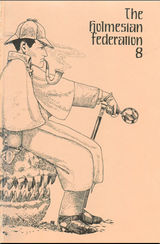 Cover of the controversial issue #8

The eighth (and final) issue of The Holmesian Federation included a novella titled "The Adventure of the Gentleman in Black", written by Tina Rhea about a case in which Holmes & Watson encounter le Comte de Saint-Germain, the protagonist in a series of novels by Chelsea Quinn Yarbro who based her character on the Count of St. Germain, a historical figure from the 18th century. On learning of the novella's publication, Yarbro contacted legal counsel and sent Cease & Desist letters to the author and editor. A protracted dispute ensued.

See much more at A Matter Of Willful Copyright Infringement.

Other Examples of Contact with TPTB and Differing Results

Before George Lucas' edict, some fans volunteered their creations:

In the spirit of sharing, early editors of Star Wars zines often sent their finished products to the offices of Lucasfilms. [7]

Another fan had this fear:

I'd love to send copies of these stories to TPTB, but I'm afraid they'd miss the author's intended meaning, and use them for plot ideas…[8]

From a submission request for the zine Here Lies Illya Kuryakin:

Anything and and everything will be read and considered and all are welcome -- from poetry to filksongs to stories. Art also greeted with open arms. No heavy 'R' or 'X' as a copy will be sent to Mr. McCallum upon publication. [9]

One zine, Third Age, was dead in the water before it even began.

Several months ago I wrote to J. Michael Straczynski to inform him of my plans to publish a fan publication based on Babylon 5. I finally received a reply a couple of weeks ago from Joanne Higgins (assistant to Straczynski) of Babylonian Productions. Even though my letter emphasized the fact that this fanzine was not for profit, Ms. Higgins has expressly forbidden me to publish Third Age, stating that "all publications using the Babylon 5 name must be licensed through Warner Brothers as they own the rights." Apparently Warner Bros does not share Paramount's view that fan publications increase fan awareness and commercial success of a series (Paramount has no problem with Star Trek fanzines as long as they are non-profit). Warner must also be unaware of the other B5 fan publications that are out there. As a result, I will not be publishing Third Age as planned. I've written back expressing my disappointment in this apparent "ban" on B5 fandom. [10]

The editors of Snakebit wrote of the response they got when they sent their zines to some of the Escape from New York creators:

John Carpenter was "... very impressed with the quality of the writing in Snakebit." And Mike McQuay said, "I read Snakebit the minute I got it out of my mailbox and loved it!"' The editors of Snakebit add: "Are we proud? You betcherass!! [11]

Deb Walsh recalls her proposed 1988 Tanith Lee zine, "Ghyste Mortua." It was to be based on Lee's Kill the Dead novel which Blake's 7 actor Paul Darrow declared was based on the characters of Avon and Vila:

..this zine was going to be my masterpiece. I had amazing stories - oh, fabulous stuff. Gorgeous art. It was going to be massive. I was exploring special black mailing envelopes, and I was designing a special insignia to use for wax seals on the envelopes. And I got involved in a very pleasant letter correspondence with the publisher of Daw Books, Donald A. Wolheim. Lovely man. I think I may have written originally to find out if there was any chance that 'Kill the Dead' might be reprinted... I mentioned the zine, he was thrilled. He mentioned the zine to Ms. Lee, she was appalled. She was very concerned at that moment in time that any hint that her novel - which was currently out of print - might be construed as stepping on BBC copyright. The zine died a sudden and definitive death. Much of the work I'd accepted found its way into other zines, but I could not publish it. [12]

Another fan explained that she was sending copies of the zine to the actors themselves:

A copy of each zine is going to PMG and DS. Everyone attending Zebra Con will be signing them before they are sent off. [13]

The actor who played Julian Bashir was given three fiction zines at the second Lunch with the Doctor. The editor gave Sid a copy of Palpitations, and he said that he would record some of the stories on tape. Another fan gave him a copy of Doctor Julian Subatoi Bashir: This is Your Life:

Again, Sid said, "I presume I'll get at least a couple of these on tape. I don't know when that will be." Finally, [L F] presented him with Through the Wormhole, showing him the Dax centerfold. [14]

At least one fan found herself disillusioned with the very show she'd based her letterzine on:

I chose to become involved with the Simon production offices, no one forced me to. But l've paid the price - the knowledge that real life problems such as networks, executives, ratings, production details and the personalaties [sic] of all those involved all dictate what we see on the air. lt's fun to totally immerse oneself in the fantasy world of Rick and A.J., but for me, it's become a luxury I can no longer enjoy. I know that we'll never see the type of episodes we talk about in this letterzine or in fan fiction and because I know that, I view Simon differently than I used to. Once you see behind the camera, it's hard to maintain the fantasy. I chose to see behind the camera, so l'm not asking for sympathy here, but nothing destroys illusions better than visits to the set and talks with people involved in the show. [15]

TPTB? Who Cares About Them?

At a recent science fiction convention, one relatively new fan contrasted her views towards TPTB with that of earlier fans. This statement not only reflects changes in studio attitudes towards fan creations, but the place of the earliest generations of fans and especially the Fair Use Act in creating an environment where this writer could say such things:

"[The panel] was a bunch of writers who had mostly gotten their start in 1970s K/S and had mostly transitioned to being profic writers. When they were sharing fandom stories from back in the day, the panel was great. When they were talking about their approach to fanfic and its relationship to canon, TPTB, profic, and tie-ins, they were so far on the other side of a cultural and to some degree generational divide from me that it wasn't even worth the time and effort to argue with them.

They believed that the reason they could write Trekfic was because Paramount let them/turned a blind eye, and they believed that when Paramount started recruiting fic writers to write tie-in novels, that amounted to Paramount finally paying attention to the fandom.[16] I don't think they could have possibly understood the relationship I have with TPTB in my fandoms, that I don't care whether or not they want me to be writing the fic, that I often write fic that would be read as deliberately confrontational toward TPTB, except that I don't give a shit whether they read it because I'm writing in conversation with other fans, not in conversation with the creators. They can't comprehend how I approach contemporary copyright law as a thing to ignore when one is not politically inspired and to campaign against when one is."[17]