Lunch with the Doctor

Lunch with the Doctor was a Star Trek: DS9 convention focusing on Alexander Siddig, the man who portrayed Dr. Julian Bashir.

Activities included an auction, lunch, an interview and questions/answers, an autograph session, raffles, and a chance to have one's photo taken with Siddig. 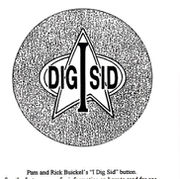 the "I Dig Sid" button

The information below is from Multi-Species Medicine #8:

The information below is from Multi-Species Medicine #20: