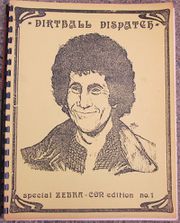 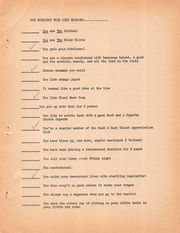 the You Are Receiving This Zine Because page

Dirtball Dispatch is a gen Starsky and Hutch fanzine. It has 100 pages. On the cover: "Special Zebra Con Edition #1."

It has a sister zine called Blond Blintz Bulletin.

It appears from this line in the editorial, "I only hope, Paul, David, and Joe Naar, that you're even as remotely impressed as I am, because, indeed and as always - it's all for you," that the publisher sent this zine to The Powers That Be.

About a Second Issue

Submissions were requested for a year in issues of S and H until it was announced in the December 1980 issue that there would be no second issue for this zine or Blond Blintz Bulletin: "Sorry, folks, but it just isn't working anymore. I have my own press and zines, and Paulie is getting more and more into Dr. Who'dom, and since we live so far apart now, working on zines together just isn't viable."

A fanzine devoted to Starsky/Hutch, or rather stories where he is the main topic (of course Hutch/Starsky is going to be in it it too). Poems, stories, art and trivia will make up this zine about the walking brillo pad/the health food fanatic of Los Angeles...This is a single printing, collectors editions of these zines. They will not be printed again. A copy of each zine are going to PMG and DS. Everyone attending Zebra Con will be signing them before they are sent off.[1]

To you, the wunderkind, our love.

This zlne, and its partner, came into being after reading and enjoying many issues of Zebra Three. I called it the "Dirtball Dispatch" because it is a collection of fine pieces about our be loved dirtball. For those of you who have been asking me where I got the name.....

Picture, if you will, two men and two women, standing on a wharf. One man, tall, blond, is holding a multi-million dollar status symbol fishing pole in his hands, and proclaiming how excellent a piece of equipment it is. The other man, short and raunchy, mumbles that it's a shame the fish don't know it. And then comes the famous lines "Oh, don't they now, dirtball!"

Now do you remember the episode? That's right, "Class in Crime," directed by none other than PMG himself.

From that day on, and because David Michael Starsky does look like dirty laundry running down the street, I have referred to the man as "Dirtball" with much love and affection.

When I started these zines, I did not expect the response that I got. I am humbled by the quality of Connie Faddis' art; delighted by Marian C. Kelly's "Darling Buds of May;" amazed at the way people have answered some of the questions that the show left unanswered. Like - what kind of power could cause Starsky to attack Hutch on Playboy Island or, in "The Rumor" - the inevitable accusation when two people are such close friends. "The Sound of Distant Drums" - Teri White's tense vision of a squadroom held hostage.

I don't know what else to say, other than thank you all for the wonderful help and cooperation in making this, my first fan

zine, a creation I'll never forget. I only hope, Paul, David, and Joe Naar, that you're even as remotely impressed as I am, because, indeed and as always - it's all for you.

Paulie loves S&H, no doubt about that. In some religions, her regard for the pair would border on mortal sin. Well, DD is her Old Testament. The most common plot-them here is: Hutch falls into danger of death, Starsky flutters, gulps, 'I love you, buddy.' and everything recovers. The best story, mostly by default, is 'The Sound of Distant Drums" by Teri White, in that it doesn't have too many or serious literary problems. By comparison, 'Stakeout' by D.C. Black has no plot; the first person narrator of Marian Kelly's 'Darling Buds of May,' ostensibly Starsky, sounds like Sam Spade with a thesaurus; Marion Hale's 'The Rumor' has an unbelievable antagonist who does a moral about-face within two sentences; Marie Patrick's 'Missing Scene: Playboy Island' is wall-to-wall hurt/comfort, heavy on the torment.[2]