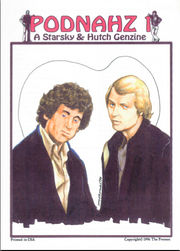 As late as Spring of 1998, a second issue of this zine was "due out soon," but it never materialized.

I can't believe I'm sitting down in front of the computer (Jazz) with this 'old friend.' It's as though my fandom has come full circle. The very first fandom I ever did a zine for was Starsky and Hutch (17 years ago). This zine as a matter of fact. Well, three zines actually, two of which were combined to make this single zine. Let me explain .... While it was Star Wars that got me into fandom, got me attending meetings of a local SF group in Chicago, Starsky and Hutch was my all time first love. It was at these meetings that I met Karen B and polluted ... er... introduced her to these two guys. The rest is a wild roller coaster history of wading upstream against a white-water of intolerant sci fi fans and conventions promoting, S&H fandom and Zebra Con (then solely a S&H con). We weren't the only zines out there. As a matter of fact, we entered S&H zine publishing on the coat tails of such classic publications as ZEBRA 3, ME & THEE, and THE PITS. But Karen and I were the first ones to attempt a convention. I'm happy to say it was a success, and though the first Zebra Con only had 60 or so members, we had an absolute blast... When Starsky and Hutch started airing again in mid-1995, 1 thought about these wonderful stories in the zines from the 70's, and called Karen to ask if she still had copies of the three mimeo zines: THE DIRTBALL DISPATCH, THE BLOND BLINTZ BULLETIN, and PARTNERS. My own copies had been destroyed - along with the rest of my fanzines and most of my record collection - in a flood that put a foot of water on the floor of my basement apartment in Chicago. Karen not only had her copies, but she graciously allowed me to borrow them so I could bully ... er ... persuade my chosen companion and podnah-in-all-things, Tami, to data enter the stories... We didn't want the first issue of PODNAHZ to get too large, so we used only selected stories and art from DIRTBALL ... and PARTNERS. I use the term "selected" simply because some of the artwork was unable to be reproduced from faded 18-year-old mimeo pages, and a few pages in some stories were worn in such a way that part of the lines were obliterated. We will sit down this summer and - bit by bit - try to reconstruct what has faded. We will include those stories in issue #2, along with the ... BLINTZ fiction and reproducible art, along with some new fiction by the new wave of writers in this great fandom.