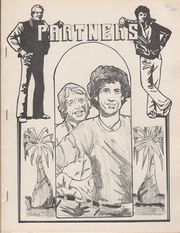 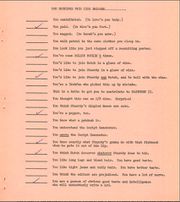 Partners is a 103-page gen Starsky and Hutch anthology.

There were 200 issues printed.

One of the editors comments in "Freeze, Sucker!" that the zine was published on time, something of a rarity in zine production. "It's good health, a repaired mimeo, and my own electrostenciller -- you have no idea of the time that saves. Unlike some of the other zines, I've been very lucky - no major breakdowns or gypsy curses. The machine ran smoothly, and consumed very little paper."

the header illo from the editorial: Paulie and Karen face off

The strongest piece in the zine, both in terms of construction and effect, is ‘One Way Trip to Nowhere.’ Hutch is not with his partner when a bullet renders Starsky paraplegic, and he suffers incredible convulsions of guilt as a result. It’s hard to tell, with regard to the show, this is meant to be happening; something so literally so crippling should be. Otherwise the reader, at best, takes it as an alternate universe, and at worst, loses her suspension of disbelief – it doesn’t fit with her universe. Passman also has a habit of ending scenes with a Significant or Ironic phrase that becomes wearing after a while. But the characterization is quite good, and the story sufficiently satisfying. Faddis’ double-page layout illo is arresting… Plainly Teri White is tired of being chewed out for lace-curtain gentility, [1] for ‘The Long and Winding Road’ there is all the sweat and stink and squalor one could ask for. And then some. In this Vietnam-based first-meeting story, I feel her Hutch is too simple-minded – one bad night and he’s ready to run home – but her Starsky is sharply recognizable as the touch-on-the-outside street survivor. It’s a one-punch story (Starsky and Hutch overcome their diverse backgrounds to become friends), but it gets its point across without too much ado. ‘Hell on Wheels’ is like those Star Trek stories by authors who like horses too much [2], they stick a few on the lower decks of the Enterprise. Overworked Homicide Sergeants temporarily transferred to the Venice Rollerskate Robbery Division is not overwhelmingly realistic, but then, this is fluff and as such it works…. Two sections survive from the Zebra Con special issues in this zine, extolling the virtues and properties of our guys. In ‘The Dirtball,’ [the authors] present a few lightweight poems, Betty DeGabriel has a technically impressive illo Starsky that unfortunately looks like it was posed for by Napoleon Solo, and Paulie unhappily juxtaposes two illos of Starsky in identical positions and expressions, like a cartoon flip-book. In ‘The Blond Blintz’ the author offers a joyous psalm of Hutch’s relief in ‘Sweet Revenge’, and Barb Story and Liz Tucker give vignettes with strange margins on the theme of ‘can’t make it without you.’… ‘Fish Story’ has a plot that revolves around Starsky learning to cast flies, ‘Pahdnahs’ parodies the show, and Honey Well’s S&H plot wheel confuses… Not even an outstanding zine, but almost every piece within it is passable, and some are even delightful. [3]

[Jen]: I also looked at a couple fan comics that had stylized draw overs of different scenes from [the TV episode] The Fix and I actually really enjoyed that because it gave a... it was actually from Partners, but it gave us a little insight into what Hutch was thinking while Starsky reminded Hutch of the events of The Fix.

[Monica]: I remember looking at those and those were interesting and I liked that they were so different from anything I've seen in a internet fandom. [4]