Kaleidoscope is a Steve Rogers/Tony Stark novel by Glow. 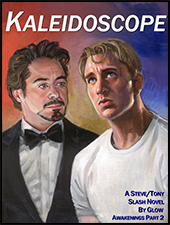 It is a sequel to Awakenings.

Blurb from Agent With Style: "This amazing sequel to Awakenings picks up where that novel left off: The Avengers packed into Tony’s limo after the momentous press conference in which Tony and Steve declared — and demonstrated — their love to the world. With the press and every prying eye with an electronic feed on their tails, they decide to implement "Operation Avengers Do Fiji," escaping New York for some much needed seclusion and downtime.

Of course, as often happens with the Avengers, things don’t exactly go according to plan. In fact, the working title for this novel was “A Not so Funny Thing Happened on the Way to Fiji.”

Written by Glow, with a beautiful color cover by Lorraine Brevig, this is a story of new love tested to the extreme. Do Tony and Steve have what it takes to stay together for better, for worse? Can Tony love a Steve Rogers minus the Captain America shine? Can Steve overcome his buried demons enough to trust Tony with his imperfection?"