Awakenings is a Steve Rogers/Tony Stark novel by Glow. 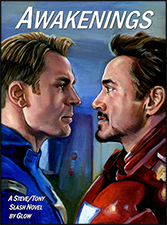 It has a sequel called Kaleidoscope.

Blurb from Agent With Style: "The Battle of New York is only hours past, but Steve Rogers’ battle to assimilate to his new world has just begun. Returning to his SHIELD-assigned apartment in Brooklyn — a place Thor astutely labels “a depressing hovel” — Steve realizes his frosty existence since his awakening is every bit as debilitating as the Arctic ice he escaped.

Steve sets upon a journey of self-discovery, even as the newly-formed Avengers team makes rebuilding what Loki and the Chitauri destroyed a priority. He rebuilds the city and his own life, encountering notions of friendship, home, family, and love he’d never considered before.

But Steve is not alone on his path: Despite every effort to deny it, Tony Stark has to face the fact that his heart has awakened as well. Steve Rogers is not only every inch the hero his father proclaimed him to be, but the man manages to rock Tony’s world in ways he’s never imagined possible.

Awakenings details the romantic, heart-warming, sometimes humorous, and sexually charged story of Steve and Tony’s emerging relationship. Their transition from teammates to friends, to lovers, to much more, is bumpy yet charming, exasperating and exhilarating. At the same time, Phil and Clint’s love overcomes life-threatening obstacles, Thor finds new amusements in his adopted world, and Natasha and Bruce discover unexpected aspects of themselves."