Chaos War is a Thor/Loki story by astolat.

Summary: "It was never easy to find Loki when he wanted to hide, but he wasn't doing a particularly good job of it at the moment. Probably he didn't think anyone from Asgard would be wasting their time hunting for him while the shining ones churned their way steadily through all the realm." 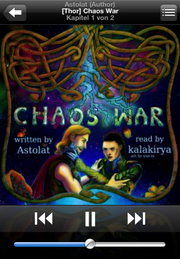 Not that there is much Thor fanfiction out there yet, but this is probably my second favorite--after Athelas, also by Astolat. In my opinion, it's a better story than Athelas, though.

Asgard is under attack by strange, horrifying creatures that have inflicted huge losses, as all of their traditional strategies fail. Odin must sleep, and in desperation, he turns the kingdom over to Loki, hoping that a non-traditional strategy is what's needed to save the realm.

Of course, not everything is sunshine after that. There may be reason to distrust Loki, whose behavior after being crowned is angry and mysterious--maybe he is controlling the shining ones, and this is all a terrible plot. Who knows, because Loki is not exactly explaining himself.

This branches away from movie canon pretty early, as far as I can tell, or maybe it could take place after it. I don't know. All I know is that it's very enjoyable.[3]

"In which there's a great war upon the realms of Asgard that maybe no one could win except for Loki -- which drives Thor increasingly INSANE. This was delightful. I loved figuring out along with Thor the methods in Loki's madness."[4]

"Loki wages a unique war against a unique enemy. Told from Thor's POV as he tries to figure out what the hell is going on and how it's actually working."[5]

This fiction is one I have gladly reread multiple times since I was first recommended to it by Steve. All of astolat's fictions are amazing, but this one is really in a class to itself. The set-up is perfect: It is wartime in Asgard, and Odin's armies are losing to the unpredictable, overpowering shining ones. The only hope left is Loki, who is so in-character with how he not only reacts to the situation but how he holds power. Everything works so perfectly it hurts a little to see such structure in a fanfiction. Oh, and did I mention that Thor is collared throughout it all? Because he is. And it's hot. Basically, even if the pseudo-incest of the ship makes you wary, this fiction will make you see the AWESOME ways that is Thor/Loki.[6]

This fic is so amazing—there’s just something so wonderful in putting someone who no one trusts or expects to succeed in charge and having them actually being a total BAMF at it. I loved Thor’s voice and how he keeps trying to understand the logic in Odin crowning Loki king and then him trying to understand what Loki is thinking thoughout the fic. And then there was Loki, who totally broke my heart in the best way with how absolutely hopeless he feels for himself while being so totally amazing. IDK, I just love the relationship between them and how relunctant it was in the beginning and how it changed.[7]