From Fanlore
< Seth
Jump to navigation Jump to search 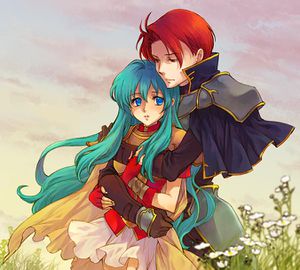 Seth/Eirika is a pairing in Fire Emblem: The Sacred Stones.

Eirika is one of the two lord protagonists of the story, with Seth a paladin in service to her family and serving as Eirika's protector and mentor during the first arc. If the player chooses Eirika's route later in the story, he will continue to serve in this role. A major catalyst for their potential romance is Seth rushing Eirika to safety as Castle Renais falls and the king is killed, with their final support conversation delving into the feelings each one had during that moment. The two seemingly accept that they cannot be together due to her being a future Queen and him being a knight, but if all three supports are unlocked, they get married.

Their shared ending is one of several for Eirika, and one of two for Seth. Eirika can also marry Prince Innes or the sage Saleh, and Seth can marry the cleric Natasha.

The pairing developed a devoted following among the Japanese fandom, but its popularity exploded when the game was released overseas. Princess/Loyal Knight pairings were always popular in Fire Emblem fandom, but Seth/Eirika seemed to be the first one to garner juggernaut ship status among American fans. It was considered "practically canon" due to Seth's feelings, plus the supports being the first to unlock and one of the easiest chains to complete. Players whose first Fire Emblem game was The Sacred Stones have cited Seth/Eirika as their first Fire Emblem ship.

The ship's popularity resulted in notable backlash from fans who either found the princess/knight dynamic boring and cliché or fans who shipped Eirika with her other suitors feeling their ship was overshadowed. The latter case wasn't helped by a trend of demonizing Prince Innes (one of Eirika's other possible matches) or Prince Lyon (who cannot canonically marry Eirika, but was in love with her) to make Seth look like the better choice.[1] Natasha also got her share of hatred from shippers due to having a paired ending with Seth.

In the early New Tens, a third subset of detractors popped up, criticizing the pairing for being antifeminist due to Seth's heavily protective nature and Eirika, a novice to combat and the battlefield, tending to look to him for guidance. Most blamed Seth, finding his behavior "creepy."[2]

The backlash has made the ship somewhat divisive in certain circles, but not to the point of depleting it's popularity. Fans of lady/knight pairings still enjoy the dynamic between the two, especially in the plot of Eirika's route, and longtime shippers remain steadfastly devoted to the couple years later.

Tropes and clichés common to fic for the pairing