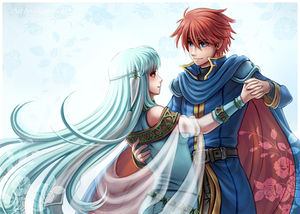 Eliwood/Ninian is a pairing in Fire Emblem: The Blazing Blade

Eliwood is one of three main lords in the 7th Fire Emblem game. Ninian is a quiet and mysterious girl traveling with her younger brother; on first glance, the two appear to be a dancer and a bard traveling the world, but the story later reveals that the main villain Nergal has been chasing them for the past few years.

Eliwood first meets Ninian when he rescues her from bandits during Lyn's story, but the two do not properly interact until the main story following the first story arc. Ninian blames herself for the tragedies the group suffered, including the death of Eliwood's father, but Eliwood reassures her that none of it was her fault. Ninian officially joins the party, becoming a playable unit after this talk.

The two are clearly attracted to one another, with Eliwood going out of his way to look after her and Ninian slowly falling in love with him. However, Ninian is a dragon taking human form, and dragons are heavily feared on Elibe. Ninian keeps her secret, but feels guilty and unworthy of Eliwood's affections for doing so. If the player pursues their support chain, Eliwood tells Ninian he loves her even if she can't tell her secret, and at the end of the game they will marry.

Eliwood/Ninian was a reasonably popular het ship in the heyday of the FE7 fandom. While not a full-on juggernaut ship, it had a huge and devoted following among fans drawn in by the sad, sweet romance between the characters threaded throughout the main plot. Some fans pointed out that even if you didn't touch the supports, the pairing is quite obvious due to Ninian's canon feelings for Eliwood and Eliwood's attention and care towards her. The supports themselves are beloved among fans of the game, seen as highly romantic, and fans say the supports between Marcus and Lilina in FE6 strongly hint that Ninian is Roy's mother.

The majority of fanfiction written for the couple in the old days was angst, detailing Ninian's feelings or Eliwood's guilt and regret after accidentally killing her. Some stories explored a sadder ending in which Ninian did go home with Nils, but neither she nor Eliwood were able to let go of their feelings for one another. Romantic drama and love confessions were also popular, as was fluff. Also common were post-game stories dealing with the bittersweet ending this couple would eventually have; due to the air of Elibe being different from her own world, Ninian would not live more than ten years tops should she stay behind with Eliwood.[1]

Due to the absence of Roy's mother or any mention of her being alive in The Binding Blade, it was commonly assumed that Ninian died in childbirth due to both her fragile appearance and the canon detail that her life would be shortened if she stayed on Elibe. Others assumed she survived the birth, but died while Roy was still a toddler.

Its major rivals were Eliwood/Lyn, Eliwood/Fiora and Hector/Eliwood, causing a few shipping wars as these fans felt the game was "forcing" Ninian on them. Ninian herself was and still is the subject of heavy controversy, some fans finding her problematic and antifeminst due to being shy, quiet, and her role as a damsel in distress before properly joining player's party. It was even once argued that the game "rewarded" her for her weaknesses by implying her canon with Eliwood, as opposed to action girls Lyn and Fiora.[2]

Some Eliwood/Ninian fans could get defensive of their OTP, or even militant in their insistence that the pairing is canon. However, compared to other shippers, they were tame and civil, preferring to celebrate the love of their pairing rather than be angry at their "rivals".