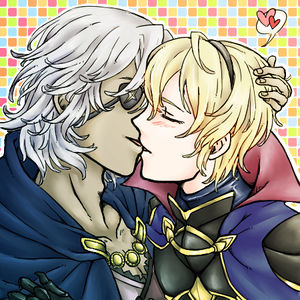 Niles/Leo is a ship in the Fire Emblem Fates fandom.

Leo is the youngest prince of Nohr, with Niles as his loyal retainer. The two met when Niles attempted to break into Krackenburg castle with a group of thieves, who used him as a decoy and left him to be caught when things turned sour. Devastated at being abandoned by the group he'd basically considered his family, Niles asked Leo to kill him. Instead, Leo asked Niles to become his retainer, and Niles has sworn his absolute devotion ever since that night.

The two have a very close and intimate relationship considering the class difference between the two. Niles, normally a foul-mouthed cynic who makes sadistic comments in many of his supports, shows a rare vulnerable and honest side when he speaks to Leo, and the standoffish Leo is warmer and more open with Niles, even allowing the outlaw to call him by only his name in their last support. Leo is shown to become slightly irritated by Niles's lack of regard for personal space in some cutscenes, but only enough to warrant a mild scolding.

Niles/Leo began as something of a rare pair, known as "ZeroLeon" before the localized names were announced. Niles/Male Corrin and Leo/Takumi were much more popular, but fans still became enamored of Leo and Niles's supports and the Loyalty Kink themes within. The pairing slowly gained more of a following over time; the majority of the fic was written by the same authors, but there was an abundance of it, especially of the smutty variety. The pairing soon became highly beloved; while not the level of Juggernaut Leo/Takumi is, many new players found themselves drawn to the dynamic, and the tag became more common on AO3.

Tropes associated with the ship