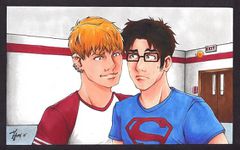 Title: When I knew you
Author: teko_tenka, posted at tekowrites
Artist: Chaoscomix, aka mgs904
Word Count: 21,414 Words
Rating: R
Warnings: Sexual situations
Pairings: Teddy/Billy
Summary: AU where the Young Avenger’s team consists of six heroes only. Billy is a hero fanboy, with a boner for every male hero out there, including the new Young Avengers. He's a senior in highschool, plowing through life, possible college applications, and his first crush. He meets Teddy, a jock with a special smile and a habit of running off at the most inappropriate of times during dates. Billy is instantly in love, and puts his all into this first relationship, but is it enough? Will Teddy ever fully open up to him? And Who's this person Billy reminds Teddy of? 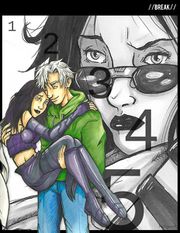 Art by holligenet for //break//

Title: Dregrees of Existence
Author: candyflosskillr
Artist: saturday_v
Beta: avienica
Word Count: 16,737
Rating: PG-13 (Teen and up)
Warnings: Offensive language, Minor character death (including death of a parent)
Pairings: Eli, Vision, but mostly this is an ensemble piece with canon pairings
Summary: Eli wakes up to a day where he is no longer a Young Avenger, neither are Kate, Billy, Teddy, Cassie or Tommy - they never were. Instead, some other kids are the Young Avengers, and they were formed by Captain America himself. When Eli looks at it hard, the whole world is a little off, and right now, he's the only one who can see it. Time to find the rest of his team, who changed everything and why, and work out what the hell he can do to fix it - before it's too late.

Title: Pieces of the Dream
Author: Siamesa
Betas: Chira Wilder, off line friend Hugh.
Word Count: ~16,500
Rating: T
Warnings: Violence, medical experimentation, institutionalized racism and homophobia.
Pairings: Billy/Teddy, Cassie/Vision, hinted at Kate/Eli. Others in background
Summary: "It was sometimes said that the government spent half its money trying to exterminate mutants, and the other half trying to create them." In a world where cold war simmers between the human nations and the mutants of Genosha, some people want peace, some want revenge, and two groups of teenagers just want answers.

Title: Every Moment After
Author:assistedreality
Artist:mozzarellaroses
Word Count: 107k
Rating: High T
Warnings: Mentions of rape, mild violence, mild gore, discussion of PTSD, and nightmare sequences with a bit of gore/violence in them.
Pairings: Hints of a Kate/Tommy/Eli love triangle, with emphasis on Tommy/Eli and Kate/Eli and some mild Kate/Tommy...Billy/Teddy and Cassie/Vision as well.
Summary: So, what did happen next? Set right after the last page of issue 12, the Young Avengers find themselves dealing with a new member, a new set of problems, and their worst foes—themselves, their emotions, the pains of their lives, and having no one to turn to but each other, even when that's part of the problem in the first place. But when the people they love end up becoming entirely different people, what happens then—and how willing are the kids going to be to fight for friends who don't really exist anymore?

Title: I fought the law...
Author: coooodes
Artist: greenteaduck
Beta: greenteaduck
Word Count: 54,549 words
Chapters: eight
Rating: PG-13
Warnings: AU, violence, character death, antisemitism, homosexual insinuation
Pairings: Teddy/Billy
Summary: 1898 New York City<br Theodore Altman, proudly wearing his father's bowler on the top of his head, sets out on a rough journey when he one day realizes his fellow policemen might be keeping him in the dark about what is actually going on in the slums of downtown Manhattan. And what if some of his coworkers are even behind much of the terror spreading on the dark streets? Being an officer himself, he sets out to find the truth about what is really happening in this busy city, turning in his desperate search for answers to a young man from the slums, a man named William Kaplan, who seems to possess all the answers Theodore could ever wish for. Without knowing it himself, this course of action will come to change his entire life, and the lives of many others...

Title: The Mirror's Edge
Author: reefofhappiness
Artist: xsilverdreamsx
Word Count: 34,865
Rating: Teen
Warnings: Discussions of intersectionality, loads of gen (like bucketfuls of it), derailed conversations of doom
Pairings: Canon
Summary: There are things that cut deep when you have to look directly at them. All in all, it's pretty difficult to handle multi-dimensional crises.