Star Wars zines began to appear in 1977, not long after the first movie was released. The zines were often focused on one or two characters, with Han Solo-specific zines, Luke Skywalker-specific fanzines, etc. Some focused specifically on Leia Organa, Darth Vader, other Sith Lords, Imperials, or Jedi. Original characters were fairly common, especially early in the movie series when the number of canon characters was still limited.

A few Star Wars stories were initially published as part of Star Trek fanzines but there was some resistance from Star Trek fans. At the start start of 1977, the Star Trek Welcommittee's Directory listed 431 Star Trek zines. By the end of the year, however, many fans were planning Star Wars and other "media" fanzines. [1]

Boldly Writing describes fandom's initial reaction to Star Wars in 1977. The fanzine "Spectrum 34...had Luke Skywalker on the cover. Inside, the editor, Jeff Johnston writes, "Behold! the fandom of Star Wars. Even as you read this a new fandom for Star Wars is developing, and growing. A fandom some people see as just a fluke, and that others see as the replacement for Star Trek fandom..."

Not all of Star Trek fandom reacted favorably to Star Wars, however. Two extremes have already formed, one saying that 'Trek is doomed' (a new slogan) citing Star Wars as its killer, and the other faction maintaining a grin-and-bear-it attitude, assuming that the enthusiasm will wane eventually leaving ST fandom intact and Star Wars as 'just another...movie. Actually, both groups are in for a few disappointments." [2]

This did not persuade some Star Trek fans. Roberta Rogow, a Star Trek zine publisher, worried that "the Star Trek Phenomenon was wearing thin.... The Old Guard was moving to other things. The people who had started writing for Star Trek fanzines were now doing Star Wars, or 'going pro,' or just GAFIATING—leaving fandom forever. But...STAR TREK LIVES!" [3]

Star Wars fanzine publishers had an uneasy relationship with Lucasfilm, the copyright owner of the Star Wars franchise. The studios tended to look the other way and ignored fanzines while at the same time demanding that fanzine editors to submit their fanzines for 'archival' (and presumably approval) purposes.

"As of February 14, 1978, this is the official status of Star Wars fanzines. The Star Wars Corp. wants to keep track of what SW zines are coming out. They are not out to hassel [sic], sue, etc., anybody, they just want to convince 20th Century Fox legal department that there are more than five SW fans who are interested in publishing zines. If you are planning a zine, they would like to know about it. (For those of you who have already published zines, I was told in a telephone call—Craig Miller [at the time the fan liaison for Lucasfilm] stated that he was ‘certain that nothing would happen.’"

However, in 1982, Maureen Garrett, Director of the Star Wars Fan Club sent warning letters to the editors of Guardian a mixed Star Wars and Star Trek fanzine that had published a single R-rated Han/Leia story. From K.S. Boyd: "Lucasfilms openly allowed genzines based on Star Wars, but were up-front about telling fans that absolutely no pornography (gay or straight) would be allowed. In May 1981, L. Deneroff and C. Levine published the adult, heterosexual stories, 'Slow Boat to Bespin, 1 and 2' in the multimedia zine Guardian #3. In August of that same year, Maureen Garrett, Director of the Official Star Wars Fan Club, mailed an explanation to fanzine publishers of her earlier sent cease-and-desist letter." [4] That letter can be seen here: Open Letter to Star Wars Zine Publishers.

Boldly Writing documents the fall-out: "Many Star Wars fans protested, calling such an action 'censorship,' while other Star Wars fans, particularly ex-Star Trek fans who left because of K/S fanzines, applauded the action. In any event, two issues later, in letterzine Forum 16, Maureen sent another letter, which stated, "We hope you understand that our policy is an exercise in OWNERSHIP not censorship... Lucasfilm supports the publication of Star Wars fanzines." Nonetheless, a letter in the same Forum issue from [another fanzine editor] Jani Hicks indicates that the clarification did not reassure ...: "Due to the move by Lucasfilm to attempt prior restraint and censorship of Star Wars fanzines, I will not be publishing, editing, writing, illustrating, or buy any professional or amateur Star Wars products after the appearance of Twin Suns 3 in May of 1982." [5]

For more on Lucas and his uneasy alliance, see TPTB's Involvement and Interference.

Interestingly, Lucasfilms' early requirement that fanzine publishers submit copies of their Star`Wars fanzines had a beneficial side effect for fandom.

After a few years, Lucasfilms gave up on collecting the fanzines and offered them to fandom. Ming Wathne, a Star Wars fan, immediately offered her garage to the collection, and used it as the genesis of a repository of all Star Wars zines. She announced the Corellian Archives, and fanzine editors throughout Star Wars fandom started sending her a copy or two of their zines. Read more at Fanzine Archives.

As more fans gained access to computers and desktop publishing software, the zines of the 80s and 90s often became large lavish productions, with color covers and many interior illustrations by various fan artists. Rather than the digital art or photo manips more common today, most of the illustrations and character portraits were pencil drawings or paintings.

The idea of categorizing fiction by pairing wasn't common in Star Wars fandom in the 70s, 80s, or early 90s, so Star Wars slash zines from that time might include stories with any slash couple, from Han/Luke to Luke/Vader to Vader/Palpatine to Random Imperial/Other Random Imperial. Gen fanzines often included explicit adult-rated het stories. Het stories often focused on Han/Leia or Luke/Leia (before and after it was discovered that they were brother and sister), but there were also a large number of stories that had Han or Luke in a romance with an original female character.

Some zines from this time were labeled as "adult" and contained both explicit het and/or slash fiction. Warnings were usually non-existant, and the only rating was usually "adult." Editors of adult-rated zines usually required purchasers to be over 17 and to make an age statement to that effect. 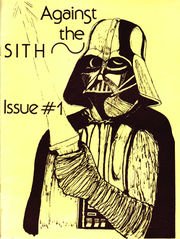 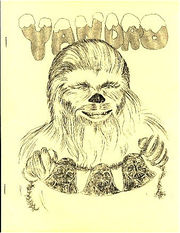 Star Wars fannish material began to appear in zines almost immediately. In September 1977, a fan wrote: "I know of at least 4 zineds in ST fandom who are already planning zines..." [6]

Also common in the 70s and 80s, before email and mailing lists were available to most people, were letterzines. These were small, cheaply produced zines that printed letters from the subscribers, often including new zine announcements, meta discussions and essays, and flame wars as well as friendly chat and news about the Star Wars movies and the fan community. Some fan club groups also produced their own letterzines, some including members' fan fiction and fan art.

An offshoot of Star Wars fanzines were Harrison Ford fanzines, which were usually Han Solo-centric zines that branched out to include fan fiction from the Indiana Jones movies, Witness, and other films starring Ford. They usually included gen and het stories, sometimes explicit, that paired Ford's characters with female characters from the movies or original characters.