Kingdom of Shadows was a three volume Star Wars slash Han/Luke novel by Cara J. Loup. Published in Germany, they are in English.

Sanctuary is the first volume and was published in 1996 and has 168 pages. 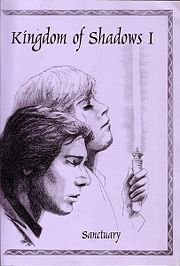 left 1
Summary from a distributor, Agent With Style:

...being trapped in the mines of Kessel with his best friend is bound to affect Han's perspective on many things. But once that happens, the change runs much deeper than he'd expected...

Hunting after Palpatine's secret cloning plans, Han and Luke find themselves stranded among the most vicious prisoners of Kessel's spice mines.

From the zine's flyer:

As they track down the Emperor's secret cloning plans, Han and Luke find themselves stranded among the prisoners of the Kessel mines - and discover a love that was never meant to be.

Crucible is the second volume and was published in 1998 and has 198 pages. It includes a song by B'Erel.

This issue does not have chapter titles. 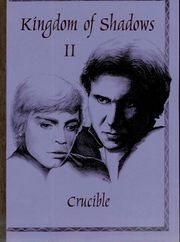 cover of volume 2
Summary from a distributor, Agent With Style:

...what if another Lord of the Sith had survived the Empire's fall? And what if Luke found his Force abilities blocked at a dangerous time? And what if, besides this, there are other problems to solve, and they are just as crucial for the life of a Jedi knight?

After a confrontation with a Lord of the Sith, Luke finds that his Force abilities have beai blocked. He joins Han in his desperate efforts to organize defenses in the system of New Alderaan where war is brewing once again.

From the zine's flyer:

"Luke sat cross-legged, facing the fire, and heard over a distance the crackle of dry fibers consumed in the heat, the rustle of clothes as Han moved up behind him. A hand settled on his shoulder. I can do it, he told himself. I can let him touch me, and there's nothing left to prove anyway. He was wrong."

Byss and Abyss is the third volume and was published in 1999 and has 196 pages. 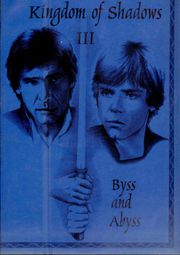 cover of volume 3
Summary from a distributor, Agent With Style:

...abducted by an Imperial commando, Han is powerless against the procedures of indoctrination and reconditioning. A desperate rescue mission and the survival of the New Republic are threatened by new and powerful enemies -- until Luke confronts another facet of the Dark Side.

Incredible!! This epic, told in three novellas. This is a fabulous Han/Luke story. Frought with danger, love, angst, It's got everything, with a complex and intriguing plot. Again, these are hard to find, so keep a look out! [1]