From Fanlore
(Redirected from Hyper Space)
Jump to: navigation, search

You may be looking for the Star Wars zine Hyperspace, which was published in the UK in 1990.

Hyper Space is a gen Star Wars newsletter of fiction and articles edited by Scott Griffith. It was to be published four times a year and ended up running for six issues.

It was the first zine published that contained Star Wars material.

This zine has the distinction of being one of the first Star Wars fanzines to appear. However, the quality of the material in this fanzine is somewhat uneven, averaging a little above mediocre. The articles have a tendancy to be very short, only whetting the reader's appetite for more— and leaving him unsatisfied. Some have been very interesting, such as the article which related the Force to Einstein's Unified Field Theory. A minus is the fact that the language and grammar of the articles has a tendancy to be stiff and awkward, which detracts from the enjoyment to the reader. The artwork has improved steadily issue by issue. Number one's artwork was horrible. Number #2 had a few nice pieces, like the back cover; both #3 and #4 have had very good artwork, although the front covers still lack something. Fan fiction began to appear in #3, and there was even more in #4. The story in #3 was enjoyable and showed promise, with well-thought out ideas. Number #4 was a bit of a disappointment; the stories for some reason were confusing and unclear. Better care in layout and editing could do wonders for this problem. I have two main complaints about the zine. First, the third issue used photo-reduction, which is also used in Issue #4. For the most part this is an asset allowing for more material. However, in places, especially in the stories, this creates a problem due to the fact that the resulting type is so small I felt like using a magnifying glass to read It! This distracts from the stories. A little less reduction would help immensely. My second complaint is cost. Hyperspace runs to 20 or 22 pages, yet costs $I.50 an issue. Yes, the zine is offset, and photo-reduction costs too, but I'd rather have a few more pages and maybe less quality printing for that amount of money. When you consider that Skywalker is 120 pages long, and costs $2.90 (in person), S1.50 for 20 pages of medium-quality content does seem a bit much. It's a nice little fanzine and has excellent quality printing, but purchasers may be unimpressed with the contents if they have seen some of the other fanzines. My biggest Impression from Hyperspace is that the editors had not seen many other fanzines before they started their own.[4] 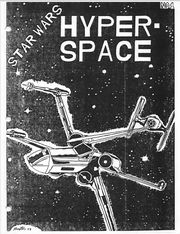 Hyper Space 1 was published in June 1977 (the editorial is dated June 15) and contains 8 pages.

Four hundred copies were printed, and as of the printing of issue #3, all were sold out.

This fanzine is what you have been waiting for—a place and space for you to contribute your thoughts, drawings, poems, etc. for all the fans of STAR WARS, science-fiction, science-fantasy, and comic books.

The movie has taken earth by intergalactic storm. The reviews are impressive. The crowds at the theatre are more than the 800 seat capacity theatre can handle.

This fanzine is a result of our excitement after having seen the movie STAR WARS. Being comic book collector: and STAR TREK fans we immediately had the idea of wanting to become involved in collecting materials concerning STAR WARS and meeting other fans. This fanzine is our opportunity to share our excitement and fun with you and hope that you will share with us. 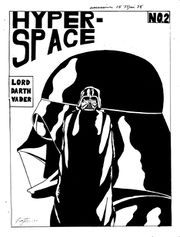 The front cover is by Kevin Baxter, the back cover by Jean Michele Martin, the producer is Mariellen Griffith.

Hyper Space 3 was published in Winter of 1978 and contains 14 pages.

It has a front cover by Kevin Baxter and an inside back cover by Patricia Munson. 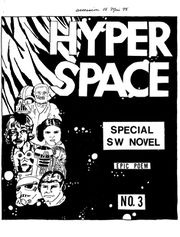 front cover of issue #3, Kevin Baxter
From the editorial:

This is it! Our third issue. Now we're really moving!. The first issue was pretty local and the second issue was better but as of this issue we are now officially national! We have lots of great material like art from Lt. Pat Munson , Chapter I of a new STAR WARS story by Yonina Gordon, Part 1 of an epic poem by Karen Weber and lots morel Our staff has been literally bombarded by contributions, especially art. We're sorry that we can't print every thing that is sent to us, but we do have limited space. We can only print what we think is the best.

Hyper Space 4 was published in Spring 1978 and contains 18 pages.

front cover of issue #4, Kevin Baxter
From the editor:

Our fourth issue! Has it really been that many issues, already? I have got to say this, we really have it made! With all the poetry, art, and stories sent to us, we practically have our 'zine written for us I Now, if we just had a typist who wanted to donate their time. The contributing artist for this issue is Teanna L. Byerts. If you like STAR WARS, you're going to love this ish.

HYPERSPACE #4 is definitely your best ish so far.

You wanted comments on the new SW novel. All I can really say is that it's a fiasco. I've been a SF fan for a long time and always had high respect for Allan Dean Foster's writing before, but his book is little more than a mish-mash of old SF cliches that retains nothing of the wonder and magic of the original movie. It made me wonder if he'd whipped it up over the weekend in as little time as possible — and did he even see the movie? the characterizations are weak and the ending is so contrived it hurts. [7] 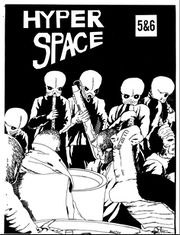 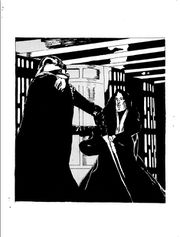 back cover of #4/6, Patricia Munson

There is much fall-out in this issue from Lucasfilm's hassling fans and fan publications. The editor says the next issue will be its last, two fans discontinue their serialized story with Star Wars characters, and another writes of how her planned interview with Dave Prowse and Peter Mayhew was canceled due to various lawsuits.

This double issue (summer and fall) and the #7 &#8 (winter and spring) will be our last effort at printing this fanzine. Refer to the next issue for why the end is at hand but it will suffice to say for now that we will finish out the year.

A serial fiction from the previous issue, "The Fall of the Galactic Empire," has been discontinued by its authors. One of them, Dana Bell, writes:

This letter is to inform you of the following: I'm afraid there will be no further submissions from the "Fall of the Galactic Empire". 2- This SW sequel is undergoing a major overhaul and rewrite, minus Lucas's characters. I think we have a damn good novel without them. The only characters that survived were the ones Brad and I created.(Kurrine, Jark, Lon Talu).... Sorry for the let down, gang. 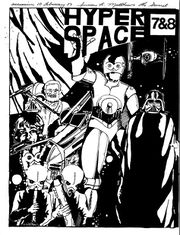 back cover of issue #7/8, staff
From the editorial:

Well, this is it. The FINAL issue. Sad to say it but we will not be printing anymore issues of HYPERSPACE. As for why? The reason is simple, we don't have the time that we wish to commit to the fanzine. Craig Miller, Director of Fan Relations of Lucasfilm Limited, P.O. Box 8669, Universal City, Cal. 91608 is trying to get copies of all of the SW fanzines for their archives. Especially the high quality ones. We sent them copies of our fanzines. If you know of any other SW fanzines, write to them and have them contact Craig Miller.