The Force is a Star Wars zine. It ran for four issues and is non-fiction.

The first page says "published June 14, 1977" but all the articles are dated July 1977. A review below also refers to this zine as having been published in July.

The editorial mentions an earlier "issue":

The Force 1 was published in July 1977 and contains 14 pages (7 pages of material, printed on one side only). 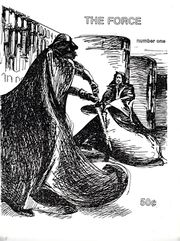 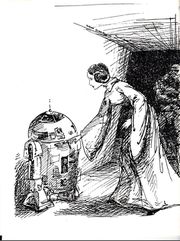 back cover of issue #1, by Susan Schulman
From the editorial:

And now the call goes out: This is a fan journal, and the only payment we can offer is five free copies, but if there are any of you who would like to submit articles for our consideration, please do. We—and our readers—are interested in inside facts about STAR WARS, its above and below the line crews, concepts of the plot, and basically anything to do with the film. Interviews will receive top attention. Artwork is desired too (oh, for a centerfold of an X-wing fighter roaring up the DEATH STAR trench:), and letters of comment are always welcome.

Some may ponder the success of STAR WARS, wondering why it has captured the imagination of millions (it is almost alarming to see grown men and women sitting in a theater cry with pride and joy and surprise and happiness while watching STAR WARS), but I don"t have to wonder. The answer is obvious. Never before has a film been so true to itself and so overwhelmingly positive in its statement about humanity. No matter what happens now, no matter how anyone interprets it, no matter how the sequels are made, STAR WARS exists. It is done, nothing can change what it is—a heroic, powerful adventure. I have seen it. I have seen the world as it can and should be. No one can take that from me. Or you.

The Force 2 was published in September 1977 and contains 14 pages. Like the first issue, the pages are only printed on one side, which means there is content on only 7 pages. 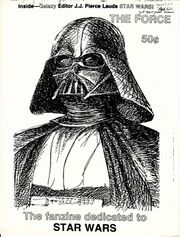 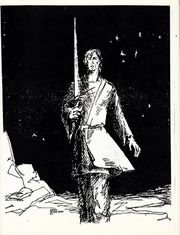 back cover of issue #2, Susan Schulman
From "Saint George and SF":

Why is STAR WARS the most important event in science fiction since... would you believe the founding of Amazing Stories by St. Hugo 51 years ago? Even if you don't want to go that far, Georg Lucas has entered the pantheon of science fiction saints.The Force only knows, we've needed a St. George for a long time—all these long years that the Dragons of the Mainstream have preyed on S.F.

It is rather ironic that the same critics who have been putting down science fiction for the last 20 or 30 years as mindless "escapism" and asking distinguished writers if they believe in flying saucers and Little Green Men should now be praising STAR WARS to the.. .stars. But let us bear with them—belated recognition is better than none at all. For, make no mistake about it, STAR WARS has earned the first true recognition for science fiction as an art form that it has ever received in the mass media. There have been science fiction movies before (pace Konkin), even good Science Fiction movies—but they have never before had critical acceptance as science fiction movies. For the most part, SF films of the past have fallen into two categories: the pseudo-intellectual film and the monster movies. And the few science fiction movies of real merit have either been rejected by the critics, or accepted in spite of their science fiction content.... Put in this context, STAR WARS can be seen for the milestone it is—the first major science fiction film accepted by critics and audiences alike because it is science fiction rather than despite it. STAR WARS makes no compromise with prevailing ideas of what a "serious" SF film ought to be—it demands that science fiction be accepted on its own terms. This is especially incredible when one considers that space opera would, by any expectation, be the least acceptable form of SF to the critics—unless treated as camp, a route Lucas courageously refused to follow. STAR WARS will give millions of people who have never read science fiction their first chance to see what science fiction really means. Star Trek was a worthy effort, but a limited one—and its qualities were mainly relative, compared to what had gone before. Of Space: 1999 and The Starlost, the less said the better—save that they, like such films as Silent Running, proved that special effects alone do not make science fiction.

Science fiction is a labor of love, and it can be created only by those who know and love it. George Lucas is such a man—he knows that science fiction is more than spectacular gadgetry and men in monster suits. Like any form of art or literature, it has its own spirit—and STAR WARS conveys that spirit.

The Force 3 was published in October 1978 and contains 8 pages. 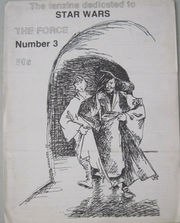 Yes, gang, a Star Wars fanzine, and this one touts itself to be the first SW zine to appear with it's first issue to appear back in July. Actually, to look at it, it's a bit overdone for my tastes. It is laid out much like a pro or semi-pro zine, done up with typeset columns, press-type titles, and a contents section that says: "Editor/Founder Victor Koman blasts, the critics of STAR WARS spacecraft maneuvering by dropping a few pronoun torpedos into the shaft of their arguments; all on page 2." Sounds like a cover blurb for the National Enquirer ... and even worse, the aforementioned article on page 2 was only 2 paragraphs long. A bit of overhype I think, to cover for the fact that editor Korman probably doesn't have much in the way of articles or submissions, or else just can't afford to print more than two 11 x 17 sheets and keep prices down. There are a good selection of reprinted photos inside, which you rarely see in Trek zines, even offset ones, but the artwork is only so-so. Perhaps with time, the editor will find a little more meat to put into his fanzine, until then it remains full of potential but still a bit skimpy. [4]