Reddie is the portmanteau name of the ship between Richie Tozier and Eddie Kaspbrak, two of the protagonists from the horror novel IT by Stephen King. They appear in all adaptations of the novel.

Richie and Eddie have been friends since kindergarten and met through their friend, Bill Denbrough. Richie often teases Eddie and calls him "Eds" or "Eddie Spaghetti" to get a reaction from him. They are all part of the "Losers Club" and fight with their friends to defeat Pennywise the clown.

Many fans have argued that Richie and/or Eddie are subtextually implied to be gay or bisexual and have feelings for each other in canon. There is much analysis of the book in this regard. Based on the book and before the 2019 film, most interpreted Eddie as gay and Richie as bisexual, with Eddie in particular as having issues and fears regarding his own sexuality.

Some meta on this subtext:

This is basically canon according the Mr. King himself. They aren’t dating or anything but as you can clearly piece together there was more to their story than just reeeeallly good friend with nooooo subtext or underlining sexuality issues. Anyone who read the book could spot it. No boys would call another boy cute in the 80’s nor would a man kiss another man’s cheek during the aids and “frick the gays” era.[1]

In IT Chapter 1, Richie and Eddie's relationship was generally represented as it had been in the book, though much of what fans considered the strongest in-book subtext was left out.

In advance of IT Chapter 2 in 2019, rumors that the relationship would be explicitly romance grew. Upon the release of the film, it was confirmed that Richie Tozier is gay, repressed his sexuality due to fear as a child, and comes to terms with being gay as an adult during Chapter 2.

Many also interpreted him as having had feelings for Eddie since childhood. Speculation increased even further after an image of Richie carving "R + _" on the Kissing Bridge (said to be know for "sucking face and carving names") was leaked. Fans argued that it would not make sense for Richie to carve the initial of any of the other Losers since his closest relationship in the movie was with Eddie. It was later confirmed that what Richie was carving was, in fact, "R + E". This is taken as confirmation that Richie has feelings for Eddie, but not that the feelings were reciprocated.

Richie seems to be the member of the Losers Club the most affected by Eddie's death. At the end of the film Richie re-carves the letters, seemingly to reestablish the connection they had.

In addition to the film, fans were very interested in the actors' comments about how they chose to depict the characters and their relationship. In anticipation of IT Chapter 2, there was much speculation in the fandom over whether or not Richie and Eddie's feelings for each other would be made explicit in the new movie, especially after it was revealed that Richie was gay. This news was immediately celebrated by fans.

While Richie was explicitly gay in IT Chapter 2, it was not confirmed that Eddie is not straight or felt the same way about Richie. However there is much fan analysis of Eddie that reads him as gay or bi and reciprocating Richie's feelings.

Prior to the 2019 film, fans commonly interpreted Eddie as gay and Richie as bisexual. After Richie was revealed to be gay in the 2019 film, it was considered more appropriate the depict Richie as gay in fanworks.

Conceivably as a defense mechanism against his own feelings, Eddie Kaspbrak canonically asks Richie Tozier repeatedly not to call him by the nickname 'Eds.' Richie, of course, ignores this inciting exasperation in his friend. However, internally Eddie admits that the name held a special meaning for him.

This was taken and used by fandom mainly in fanfiction but also in fanart to show the way these two characters chose to flirt, or hide their feelings for one another. 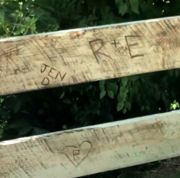 R+E is a representation of Sweetie Graffiti within the IT fandom by and for the Reddie ship.

It is by far the most prominent example of this trope due in large part to its canon nature. In the 2019 film, Richie Tozier carved his and Eddie Kaspbrak's initials into the wood of the kissing bridge.

Many headcanon that Eddie is present for the completion/addition of the 'E' after the defeat of Pennywise, for added closure and confirmation that Richie's romantic feelings were not only acknowledged, but reciprocated.

To the lower left, it is also notable that there is an 'R' carved within a heart. Some speculate that this was Eddie, having a similar idea to Richie, also declaring his love silently but publicly for his best friend. This secondary marking may very possibly be unrelated. However, much of the subtext originally thought to be fanon surrounding the 2017 film turned out to be intentional, upon the release of the 2019 film. So speculation may be more along the lines of an educated guess.

Their synonymous is Love Doodles & Umbrella of Togetherness and Kilroy Was Here is the non-romantic variation.

untitled, Archived version by ElysianDuskFandom: ITDate: 8 September 2019Medium: FanartStatus: CompleteGenre: Fluff, R+E
everything is fine :^)
You Make Me Sick Inside, Archived version by BimmyShrugFandom: ITDate: 28 Mar 2020Length: 18,412Medium: FanfictionStatus: CompleteGenre: Bed Sharing, Dark AU, First Time, Friends to Lovers, High School AU, Horror, R+E, Yandere
(CW: Child Abuse, Gore, Homophobia & Internalized Homophobia, Mental Illness, Mention of Non-con [though in the end is more Dub-con because Richie is {loosely said} okay with it after-the-fact,] Minor Character D-ath by murder, Resolved Angst, Self Harm, Violence) - All Richie ever wanted was to be alone with Eddie. Alone, alone from everyone. He wanted everyone in the world to fuck off and leave them alone, so that Eddie would put his feet in Richie’s lap and giggle that way he did just for him. So he could touch Eddie on his legs and stare at his smile and not be afraid that other people would be mad at him for doing it.
untitled, Archived version by MoonnstinFandom: ITDate: 30 Mar 2020Medium: FanartStatus: CompleteGenre: R+E
reposting some old art.