Bed sharing ("Only One Bed") is a trope where characters discover they have to, or that they choose to, share a bed either for sexual tension or comedic effect. Sometimes the characters suggest alternative solutions, such as sleeping on the floor or the couch, but after an argument about how uncomfortable or cold it must be, they decide to share the bed anyway.

It can be executed platonically or shippily, and can sometimes be found in poly fanworks.

In first time pairing stories, the unexpected single bed is the final push, requiring two characters to share a bed and finally admit their feelings. 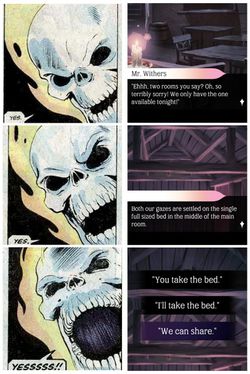 There are many memes about this trope that point out how excited people get at the idea of characters sharing a bed despite how clichéd it is. By: persnikety-p (2019)

Gen bed sharing gets two characters into bed for reasons other than sex. While not always, the trope is usually employed as an off-shoot of hurt/comfort, with the emotional and physical comfort offered after bad dreams, emotional meltdowns, and physical injury. Both characters are portrayed as finding relief with this close contact.

All the same, even though both [the genres slash and smarm] are writing primarily about love, I really would argue that there's a difference between smarm and slash, and I think it has something to do with the surprise of smarm. Take smarm's favorite chestnut, Jim and Blair sharing a bed. Well, if Jim and Blair are lovers, then there's nothing very unexpected going on when they crawl in bed together. It's sort of the whole point. But when two straight men share a bed, and are comfortable with that degree of intimacy and that degree of trust -- you're never more vulnerable than when you're asleep, after all -- then that is something unexpected. And that's the kick of smarm for me. That "oh, my" moment when the walls come down, and two friends nakedly express their love for each other without reservation or fear, even though they're "just friends.[2]

In fandoms where teamfic, found family, and OTEveryone relationships are common, bed sharing will often occur in an ambiguous space between ship-based bed sharing and gen bed sharing. Like with gen bed sharing, the impetus is often hurt/comfort; it can also be simple fluff. A poly bed sharing arrangement is sometimes called a "puppy pile."

Too Many Beds, an inversion of this trope, gained popularity in 2020/2021. In this setup, the characters want an excuse to share a bed, but are thwarted by Reasons. Of course in the happy versions, the characters end up sharing anyway. Just like the original trope, this can be exectued in a fluffy or angsty way, as crack or in earnest.

This prompt featured in the 2020 Reverse Trope Bingo challenge in NCT fandom (K-Pop). It was also mentioned in a 2020 tiktok video by user 'dakotajohnsongf' who asked for "backwards book tropes." A screencap of the comment section shows "Too many beds" as the most popular comment was widely circulated on Twitter on several occasions, going viral in August 2021.[3]