Darcy/Steve is a non-canon pairing of Darcy Lewis and Steve Rogers (Captain America) of the Marvel Cinematic Universe.

Darcy/Steve pairing is a fairly popular het ship in the Marvel Cinematic Universe fandom despite the fact that two have yet to meet (or even appear in the same movie together[2]).

The pairing started to appear by November 2011, months after the first Thor and Captain America films were released[3]. However, it wasn't until 2012 and after the release of The Avengers film that the pairing's popularity grew. The LiveJournal community, steve_darcy, was created in August 2012[4]. By 2013, a few big name fans - victoria_p, sarcastic_fina, Merideath - posted Darcy/Steve fanfiction, which probably gained the ship more followers. The two Tumblr blogs were created in 2013: darcy-and-steve was opened in February[5] and fuckyeahstevedarcy opened in April[6]. 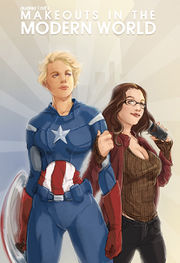 fem!Steve Rogers/Darcy Lewis fanart by Ponderosa, created for Avengers Big Bang 2012 for the story Makeouts in the Modern World.