This article documents a currently unfolding situation within the fannish realm. Content may change quickly, and the page structure itself may undergo major revision. New details are very welcome.

The Covid-19 pandemic has had a huge impact on the daily lives of much of the world's population. In an effort to prevent the spread of the virus many people are self-isolating in line with their country or state's guidelines. These self-isolation measures are also having an impact on fandom and fan activities.

Many large gatherings of fans at conventions have been cancelled or are considering ways in which they can go online. While many professional media have suspended production, there has been a noticeable increase in fans accessing fan created content. Fan creators have also responded to the crisis with works dealing explicitly with Covid-19, social distancing and related topics.

One of the first forms of social distancing implemented in many places was limiting the number of people who could gather together in one place. Since many forms of professional entertainment (and things that inspire fandoms) require large numbers of people, it resulted in cancelled events and production hiatuses.

In terms of American network television, most shows were unable to finish filming the last few episodes of the season before the production hiatus was implemented. For shows in their final season, such as Supernatural's season 15, it leaves the question of whether there will ever be a proper ending. For shows in their first season, it severely complicates the idea of renewal.

It's not just existing shows being affected. Just as current shows are unable to film for the foreseeable future, so too are new shows unable to film a pilot, essentially stalling the creation of new fandoms. The entire idea of the 2020-21 tv season is in question.

Music RPF fandoms are also affected, as popular bands and solo acts cancelled or postponed their tours. For example, at least some of the tourdates for My Chemical Romance's long-awaited reunion tour, scheduled to begin in March, were postponed.[1] BTS's 2020 tour was also postponed.[2]

All Broadway productions stopped performances on March 12, so Theater fans could no longer attend performances, and some shows ended up closing and not planning on reopening. [3]

By mid March 2020, quarantine fics were appearing on Ao3. Some of these works were Canon AUs where the reason for the quarantine was not related to the current Covid-19 virus. Still other works were canon-divergent works or Modern AUs set during the virus outbreak, and featured characters self-isolating in line with Covid-19 measures. In some of these works, Character X gets corona virus can lead to sickfic scenarios.

Lock Down Fest ran from March 20-30, 2020 and was a "non-anon, self-posting, multi-ship and multi-fandom mini fest that is designed to bring comfort to everyone staying indoors under quarantine restrictions at the moment and to all of us experiencing fear because of the pandemic" that was hosted on AO3. All works posted as part of the fest had to follow one of two themes, either "Getting Stuck In/Isolated Together (which doesn’t need to involve the virus in any way whatsoever)" or "Quarantine-inspired, if it occurs during the current pandemic".[7] 179 works in 110 fandoms were posted to the collection.

Fic Journal of the Plague Year is an ongoing fic collection on AO3. The profile states: "All fics in this open collection should be: (1) written during the period of the coronavirus situation and (2) include commentary in the end note explaining how the fic and/or writing process were affected by the global crisis. The fics don't necessarily have to be about illness, isolation, or the effects of the pandemic; instead, the feelings, thoughts, and experiences the writer is going through during this situation should have influenced the fics in some way."[8]

The Isolated Johnlock Collection on AO3 collects fanworks for the Sherlock (TV series) (and related fandoms) that are thematically related to the pandemic. Specifically, works where "John and Sherlock are isolated at 221B or somewhere else (abroad, an island) due to CORVID19 or any other type of apocalypse (aliens/zombies). One of them can be isolated while the other is an essential worker. John and Sherlock can be characters in the background while your main otp takes the lead." As of August 2020, the collection has 60 fanworks.[10] 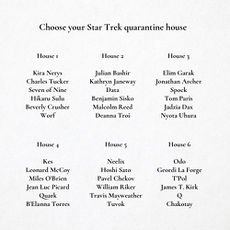 A quarantine house meme posted by weallturnleft on tumblr for the Star Trek fandom.

Another trend includes creating a list of fictional characters (or outside of fandom, celebrities or politicians) divided into houses and having commentators choose a house to lockdown in.

this quarantine got me feeling like luke’s guy walker… trapped on dagobah with that gay little frog, help LOL![11]

At the end of 2020, there were many fandom-specific 2020 Calendars - with creators using gifs from a particular source material to represent the months of 2020. March often extended for several months, while several other months merged into one month.[12] Some Calendars also included Destiel, as an event occurring between November and December, a reference to November 5, 2020.[13] A very early text post by Tumblr user gracelessstars may have been the inspiration for these 2020 Calendars; posted on December 2 2020, several 2020 Calendars link to this post as their inspiration.[14]

In mid - 2021, the My Fall Plans / The Delta Variant meme arose on Twitter and spread to other social media sites and Tumblr.[15] The meme usually consists of two pictures, often from the same source material, one labeled "My Fall Plans," and the other labeled "Delta Variant". The implication been that the Delta variant is turning up to ruin people's 2021 plans.

March 2020 saw a surge in people reading fanfiction, as schools and colleges closed and many people were self-isolating at home. The fanfiction archive Ao3 put emergency measures in place to help the site cope with its increased traffic.

The Archive has seen a marked uptick in traffic during March, with weekly page views increasing from 262 million to 298 million in just two weeks. We expect this trend to continue, and in order to keep the site running, we need to take emergency measures. The quickest, most helpful change we can make is caching the works we serve to logged out users. Unfortunately, this means that starting immediately, logged out users may experience a delay in work updates, and hits from logged out users will no longer be included in works' hit counts.[16]

Fans reacted positively to the measures. Many encouraged logged out users to sign up for accounts, with Ao3 users on Tumblr offering to send invite links to logged out users. Readers were also been encouraged to show their appreciation for creators through the use of comments and kudos, as hits might no longer be an accurate reflection of readership.

my recommendation is to get yourselves some AO3 accounts if you somehow don’t have one yet. and, as a creator, I would highly recommend leaving feedback on stuff you like. there is going to be an artificial decrease in hits for authors for a while, and this is a particularly lonely and stressful time. if someone’s work is helping you through this difficult time…. help them in return.[17]

This was continuing a trend some were already noticing in fandom. Even before the Ao3 emergency measures were announced, some fans had been encouraging readers to leave comments as a show of gratitude to fanfic writers in this time of crisis.[citation needed] There definitely is evidence that fans were commenting more during the period. Comparing April 2020 to February 2020 numbers, traffic was up by 24% and kudos increased by 23%. At the same time, comments were up an impressive 42% on February's numbers.[18]

Others encouraged fans to donate to the OTW, the volunteer organization behind the Ao3 that relied entirely on donations.

And if you can spare in in the meantime, consider donating to AO3. We’re home in isolation and they’re here for us, hosting the fanfiction we’re all keeping ourselves busy reading and writing to slow the effects of cabin fever. Sending a few bucks their way to help them keep doing that wouldn’t go awry.[19]

A meme posted by What Happens on the Holodeck, Stays on the Holodeck. Many fans have produced fannish memes to encourage social distancing or mask wearing, with varying levels of bluntness.