My Fall Plans / The Delta Variant

My Fall Plans / Delta Variant refers to a meme template that grew popular on Twitter in August of 2021. The format consists of two pictures, the first labeled "My Fall Plans", and the second labeled "Delta Variant" - which is a variant of the COVID-19 virus that is more transmissible than the original strain of the virus. The format humorously expresses disappointment that the Delta Variant has potentially "ruined" peoples' plans for Autumn 2021, often using pop culture references[1].

On August 8th, 2021, the user account jush_for_fun[2] posted the first known iteration of the meme, using characters Shea and Sasha from RuPaul's Drag Race gaining over 1,600 retweets and 10,000 likes (shown below). The meme references Sasha's dramatic comeback victory in the final challenge of the season.

The format saw increased usage over the following several days as people generally used famous characters from film and television to represent "fall plans" and the thing that kills or harms that character as "delta variant". 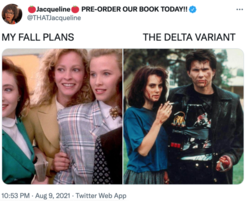 MFP vs. TDV meme by THATJacqueline

On August 9th, 2021, user THATJacqueline[3] posted the Heathers from Heathers next to Winona Ryder and Christian Slater from the film, gaining over 280 retweets and 1,300 likes (shown below, left). 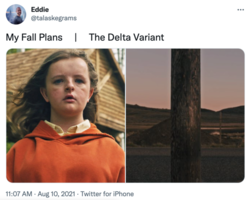 MFP vs. TDV meme by talaskegrams

On August 10th, user talaskegrams[4] posted the little girl from Hereditary and a telephone pole, gaining over 2,700 retweets and 17,000 likes (shown below, right). The jokes were covered by Mashable[5].