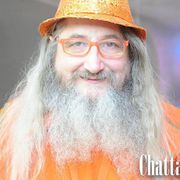 Michael James Lowrey is a member of science fiction fandom from Milwaukee, Wisconsin, known to fannish and other circles as Orange Mike for his habit of wearing orange clothing on days which are not St. Patrick's Day. At science fiction conventions and on other occasions (union bargaining sessions and conventions, testimony at legislative hearings, political conventions, and others) this goes as far as head-to-toe orange clothing (he once confessed to a reporter that he owned more than 60 pairs of orange underwear)[1]

A native of rural West Tennessee, he first encountered science fiction fandom (and the Society for Creative Anachronism) at the University of Chicago in 1971. After returning to Tennessee, Lowrey joined the N3F (serving one term on its executive board) and in 1975 joined the Nashville science fiction club (then led by Ken Moore) and again became active in the SCA. He attended his first SF convention (a Midwestcon) in 1975, and his first Worldcon (MidAmeriCon) in 1976. During this period, he attended a number of midwestern conventions such as Rivercon and Chambanacon, and often ran into an Iowa fan called Cicatrice du Veritas.

In 1976, Lowrey was membership number three at the first Chattacon, which drew 81 members. He is now the only person left who has attended every single Chattacon, a fact which occasionally draws attention in press coverage of the convention.[2]

In 1977, Lowrey moved to Milwaukee, and connected with local fandom and the local SCA. He served on the convention committee for X-Con, and continued to attend conventions, where he continued to encounter Cicatrice. In 1979, she moved to Milwaukee, and in 1981 they were married at X-Con 5. (He and Cicatrice were briefly interviewed on the BBC World Service programme Outlook; the broadcast may be found at http://www.bbc.co.uk/programmes/p017cq6l with them nearer the end than the beginning, discussing their wedding at a con.) They remained active in local fandom, and the SCA (both receiving Awards of Arms from the local SCA kingdom to acknowledge their volunteer work). A long-time wargamer, he encountered Dungeons and Dragons about this time, and attended his first Gen Con in 1980. In 1984, Lowrey had a casual discussion with Gary Gygax at the bookstore where he (Lowrey) had been working since 1978, and Gygax encouraged him to submit an article to Dragon magazine. They bought the article; it was his first commercial sale. He has continued to work sporadically as a freelance writer of non-fiction (particularly book reviews) ever since.

He and Cicatrice both joined MilwApa when it was formed in 1984, although his participation has been more sporadic. He has also been a member (briefly) of FAPA and the Turbo-Charged Party Animal APA. During this period, he was recruited into the Great Dark Horde of the SCA. In 1995, he and Cicatrice were blessed with their one and only fanspring, Kelly J.A. "Ink" Lowrey.


TRIBAL OR ETHNIC AFFILIATION: FAN
Fan Guest of Honor speech at ICon 25 (Coralville, IA; 10-14-2000)
I work at the University of Wisconsin-Milwaukee, for a program called "Cultures and Communities." In our class on multiculturalism in America, one of the first things we ask students to do is to write an essay on their ethnic identity.
Now by genetics and upbringing, my ethnic identity is pretty much generic redneck: Scotch-Irish, some Cherokee, undoubtedly some English (I don't often admit to that last). I certainly identify with the Irish part (yes, Scotch-Irish means Ulster Irish, which means by heredity I AM an Orangeman; so sue me!) and the Cherokee part; but it's an intellectual identification. I had no cherished stories told me by elders steeped in the old ways; just tales, however beloved, learned from books.
I guess my youth was pretty standard for a fan: I was the bookworm, the kid who got bored in school and used up the meager resources of the school library, the one with few real peers who could understand what I was talking about. Occasionally I'd find somebody who was as inspired as I was by a Heinlein novel or the latest issue of Fantasy & Science Fiction; but such experiences were few and far between. Then I went to college up North, and found an actual science fiction club. It was informal, based off-campus, and full of wiser, older people, some of them in their late twenties or even older[!]; but they didn't care how old I was, just what kind of a mind I had. Once a week, I was pretty much guaranteed that I could find kindred souls with whom to talk. It was a lifesaver.
I left that college, and returned to my tiny home town. My sole contact with the SF community was the National Fantasy Fan Federation, the good old, much-abused N3F. It reminded me that there was something out there beyond the mundane realities of my roots; and I will always love it for that.
Then I moved to Nashville, where there was a large SF club with monthly meetings, discussion groups, and more; I was among kindred spirits again, and was delighted. At a meeting, somebody talked about going to an actual convention, in faraway Ohio somewhere. I'd heard about these things back in Chicago, and leapt at the chance. I stood there on the curb that Friday morning, my orange trooper hat on my head, my brand-new orange patent leather loafers on my feet, ready for a new experience. I was not disappointed.
It was what they called a small relaxacon, I was to learn (specifically, it was MidwestCon); but to me it was all the wonders of fandom unveiled. There was a dealer's room, and fanzines, and a few panels, and a film room (yes, we were still using film in those days), and pros whose books I'd read and admired (who would actually talk to a goshwowoboy neo like myself). But above all else there were the fans.
I was home. I had discovered my tribe, my people, my identity.
Whatever else I may be - husband, daddy, union steward, Esperantist, wearer of orange garments, Quaker, part-Cherokee, feminist, Irishman, Macintosh user, Wobbly, ex-Tennessean, anarcho-socialist, Wisconsinite, Hordesman - I am a Fan.
That first convention experience was in 1975, a quarter of a century ago; and it was the start of the best thing that ever happened to me. I have loved and married within the tribe, and we (Cicatrice and I, with the help of the rest of fandom) are now raising a wonderful femmefan who knows who her people are. By the time that first weekend was over I knew: forever and eternally, I am a Fan, a natural-born free citizen of the ImagiNation. This is my Way of Life, which I will fight to defend against all comers, regardless of what excuse they may have to attack it.


In the old days, before conventions like this one became commonplace, it was said: It is a Proud and Lonely Thing to be a Fan. Well, it's not so lonely anymore; but for me It is an Extremely Proud Thing to be a Fan. I am honored beyond description to be your Fan Guest of Honor this weekend, and I thank you.

He published two issues of his own fanzine, Vojo de Vivo, in 2000 and 2001. He appeared in the 2004 feature-length documentary film Finding the Future: A Science Fiction Conversation, and their child Kelly appears in the "Bonus" section of the DVD thereof.

He began to edit Wikipedia in 2004 after a panel discussion at Wiscon; his first six edits were about science fiction fandom and science fiction fanzines. He is one of the 600 most active editors in the English-language Wikipedia, and is now an admin there. (He also edits Fancyclopedia and Fanlore, and wrote the first version of this article.)

In 2003, Lowrey made an unsuccessful bid to be a delegate for the Trans-Atlantic Fan Fund (TAFF). He again ran unsuccessfully for TAFF in 2018. In 2019, he was elected the 2020 North America-Europe delegate for the Trans-Atlantic Fan Fund, and was preparing for a Spring 2020 visit scheduled to include Sweden (the Swecon), Finland, Poland, Spain, and the United Kingdom (Eastercon). Due to the COVID pandemic, that trip has been postponed for some time; but he currently plans to attend the 2022 Eurocon in Luxembourgh, and the 2022 Eastercon in southern Britain.[3]