It is unknown if there was only one, or if it is a series. 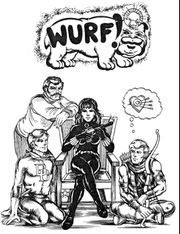 Comments from the Zine's Cover Artist

I very rarely do pictures of well-known media or comics characters. I usually depict original characters or personages from books. But here dredged from the distant past are some renderings of Marvel Comics characters from the "Avengers" with other Marvel guest stars. I was asked to do this as a fan magazine ("fanzine") cover by the legendary Pat Floss, whose narcissism I served on many an artistic occasion. She asked to be depicted as the "Black Widow," seated in the center with some sort of weapon, dressed in the shiny black catsuit she wore in the comics. The portrait, so to say, is flattering. The shiny fabric is known as "nylon cire' " or waxed nylon and it was stretchy and reflective and very popular in fashion back in the late 60s, when Diana Rigg wore a similar jumpsuit on the British TV "Avengers."

By her sides are Marvel characters she had relationships with, on the left "Daredevil" and above him a non-superpowered gentleman whose name I've forgotten but who was her spy protector for a while. On the right is "Hawkeye" the super-archer who carried on with her at many occasions. The arrows through the heart is not my idea, it was Pat's, who was tickled that she had Marvel men fawning over her.

The "Wurf" dog character belongs to another Marvel title, "The Inhumans," who Ms. Pat was also fond of. The dog was a giant bulldog, the size of a small car, who could teleport people and things across space and different dimensions.

Pat disappeared from my life in the late '80s, before I made my move to the DC area, and I have not found any relevant information about her, nor have I tried to.