You may be looking for the Review Zine, the Australian reviewzine. 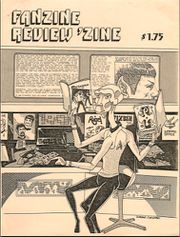 Fanzine Review 'Zine is a newsletter reviewing fanzines. It was published by T'Kuhtian Press, of MediaWest*Con fame.

Like some fanzines of that era, earlier issues were published without the required pre-1989 copyright notices, possibly placing the fanzine in the public domain.

Fanzine Review 'Zine 1 was published in 1976 and ran 13 mimeographed pages. It has a two-tone color cover by Gordon Carleton, is lettersized and stapled and printed on green paper.

The first issue sold out by November.

First off, I want to apologize for this thing being some two-three months later than originally scheduled. Secondly, I wish to apologize for the price of this [$1.75]... I'm afraid that as time has gone one, the format of this 'zine has become more and more simplified until it will probably be less pages than I'd originally intended... I'd originally planned to include the review form for each 'zine reviewed. I've dropped this idea, mainly because I couldn't face the thought of typing up an identical form fifteen times on fifteen stencils (yeah), but also because I can't currently afford to pay $1.50 per electro-stencil. *Sigh*... ...I hope this review 'zine is useful. TREK 'zines are proliferating at an astonishing rate. I'm an avid collector, but I doubt whether any one person can possibly keep up with all the 'zines -- even on a monthly basis... I do not intend to go in for the nasty, back-biting, severely critical type of review that seems to be increasingly common today. Instead, I hope to offer a relaxed, casual overview of 'zines in general, primarily to allow the fan to chose the type(s) of 'zine(s) most to his or her liking... My apologies for the cost, once again. Now that I've finished typing this issue, I'm mortally ashamed. Those of you who have ordered this issue will receive a .75 cent cost reduction on the second issue. Fair enough?

The cover of this first issue is truly an excellent piece of Lt. Arex examining various fanzines at the communications console on the bridge. The rest of this zine, however, does not fare nearly so well as the cover. What Lori has done here is to request 'reviews' from various people in fandom. These reviews are done on form sheets, which Lori then takes and summarizes. The more reviews sent in for a particular fanzine, the more complete the review will look when it is published. The printed reviews represent not only the opinions of one or more authors but of Lori herself. The editor admits that the reviews within will be superficial, but that isn't the word. Can you imagine discussing Menagerie #1-9 in only 22 lines? Or Berengaria #1-7 in only 12 lines? There are 15 reviews of 15 major zines or stories in only 9 pages. There is no attention to detail or individual stories. The reviews tend to come down to the level of making only surface comments on relative worth. Moreover, the price of this zine is shockingly insulting. The editor DOES again admit this and promises a seventy-five cents cut off the next issue, which means #2 will be $1.00. That's ridiculous! Don't let anyone fool you, mimeo is almost always 3 times cheaper than offset, and even at $1, 12 pages of mimeo (double-spaced no less) is still vilifying, and combined with insensitive, over-generalized, over-shortened, over Lori-ized 'reviews' (ptuii!), this makes for something that can only be of help to the rankest neos with the thickest of wallets, and deserves no place whatsoever in mainstream fandom or support from fans whose money will be wasted and whose submitted reviews will be written over by someone else and adulterated in viewpoint.[1]

This should be more accurately titled, "The Buyer's Guide to Star Trek Fanzines," as it is just that. In it are reviewed some fifteen odd (and not so odd) zines from Interphase and The Night of the Twin Moons. All are fairly reviewed, and I as far as I can tell, impartially reviewed. The zine itself is a little skimpier than originally planned (from 64 to 6 pages), yet despite its small size, all of the reviews seem to have adequate space, in fact, there is a waste of space, with the back of the last page and the back cover left blank. The front cover, however, has a very good illustration by Gordon Carlton on it. Whether you're just starting your zine collection, or have been collecting for years, I'm sure you'll find the FZRZ a monumentous help.[2]

This 'zine is an excellent idea, but I really think it should be put out more often.[3] 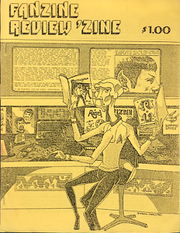 This issue is undated (though between May and July 1977). The majority of zines reviewed in this issue are from 1976, but seven of them are from early 1977—the most recent being "The Other Side of Paradise #2", published in May 1977. The review of "T-Negative" is an anomaly; it says it's reviewing issues #1-35, but #34/35 didn't come out until 1979. The previous issue, however, came out in March 1977 and the reviewer says "T-Negative will cease publishing future issues very shortly", so we assume this was a "forward looking" reference, as part of reviewing the entire series. This issue of Fanzine Review 'Zine is advertised for sale in Warped Space #26/27 (July 1977), so that almost certainly puts the publication date between May '77 and July '77.

The cover is essentially the same as issue #1, with three changes: (i) A lowered price of $1.00; (ii) It was printed on yellow paper (instead of the tan of #1); (iii) The cover art has less contrast, and is a bit muddy in comparison to #1. This may be due to changing from mimeo to offset printing.

One place this zine was sold was from T'Kuhtian Press suite at SeKWester*Con Too.[4]

In Warped Space #2, the editor wrote: "... all those who ordered the first issue will get the second issue free. And no, I don't know when the issue will come out, or what the subscription rates will be."

Fanzines reviewed in this issue are:

Now, this is an issue that certainly never happened. It was proposed in Scuttlebutt #13 in 1979 ("Reviews are still needed. SASE for format. Contributors receive a 50% reduction in price.") as well as Dark Interlude where the editor envisioned "an early 1979" publication date.