You may be looking for the 1980 con Southern Con, or the online video con VidCon (California).

Southern Media Con (formerly known as Vidcon) was a fannish gathering in the midsummer in St. Peterburg, FL. (Not to be confused with the professional video industry convention called "Vidcon.") More information can be found at the WayBack Machine archived Link. Vidcon was het, gen and slash friendly. The convention also sponsored the Editor's Choice Awards.

The con has changed its name! It is now Southern Media Con. Current info is here.

A wonderful relaxicon... This was Vidcon's third year... Friday night's events included some interesting panels, a Chinese dinner, discussions, and some vid viewing that went into the wee hours. Saturday was filled with activities. Lots of interesting panels, including discussions of new fandoms (Sentinel, The Pretender among some of them), A-Team, discussion of war shows called 'War is Hell' about Rat Patrol and Combat, and a discussion of professional writing markets for writers. In the con suite, we were treated to a fencing demonstration. In the evening, I presented a staged reading of an original science fiction play called 'The Queen of Light.' My thanks to the concom for letting me bring my actors to the event. We had a lot of fun, and I think the con members enjoyed the show. The guys in the cast got a kick out of performing in front of a primarily female audience. And, thanks to the costume of our very attractive leading lady (a couple of well-place jewels above the waist and a hint of a skirt), every single male who attended the con viewed the play. :-) In the evening, we had a tasty BBQ dinner and a brief music vid contest, followed by the Editor's Choice Awards for fanzines. Later there were good conversations in the con suite and viewings of choice videos, including the X-Files bloopers. Sunday was more panels and last minute buying in the dealer's room. I enjoyed the informal Babylon Five discussion in the con suite... We also had a visit from the 'celebrity' of Vidcon's charity -- a beautiful Florida panther. Vidcon supports Wildlife Rescue, which helps the Florida panther and other wildlife... For those interested, the con arranged a trip to a local theater for a showing of Star Wars followed by an expedition to Berns Steakhouse for dinner. Nearly twenty con attendees signed up to enjoy the group experience of The Force. It was a nice turnout for the convention, lots of local fans plus fans who flew down from Philadelphia, New York and California... A great job done by the hosting group, Stone Hill Science Fiction Association. These people not only host Vidcon (this wonderful, intimate zine convention) but also put on Necronomicon, a SF convention that last year had over 1200 attendees. Praise to Deb Hicks and the rest of Stone Hill! [2]

"It's that time again!

What do you get for $25? Lots of great panels! Dozens and dozens of fellow fans to talk to. Two great meals - Chinese on Friday and real southern bar-b-que on Saturday. (Vegans, call and we'll get you something special.) Six big tables of orphan zines. Dealers tables with jewelry, pictures, gaming stuff and media toys. Song vids and bloopers on Saturday night. A visit from a live Florida panther for our charity, Wildlife Rescue Inc. (And another surprise visit on Sunday.) Raffles! A really great con suite. A fencing demo. Special guest, horror/fantasy writer Richard Lee Byers will talk about going pro. Writers workshop. And more!

Dealers - We have three tables left. You can get one for a membership and a donation to the raffle! Contact Deb for details.

Come join us at the souths smallest, friendliest con!"

Yeah. Went. Spent about 45 minutes there. Spent more time at the University Mall. About 30 people there, 1 track of programming, a dealer's room that was more than half gaming (the con was split half VidCon, half a gaming convention), one table with zines (as an Orphan Zine table that Deb ran most of the day!). Not really worth the 1 1/2 hour drive each way. MediaWest or Eclecticon, it ain't. [3]

The video contest that year had 43 entries, the highest ever. 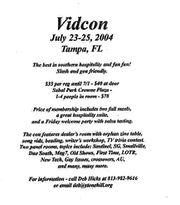 a flyer printed in the MediaWest*Con program book

The event was held in July 2016. Approximately 30 people attended.

Vids shown on Friday at the 2016 convention