Are you looking for SHareCon (Starsky and Hutch convention)?

The SHareCon zine contains both gen and slash. It is published every two years for the SHareCon convention in Maryland. 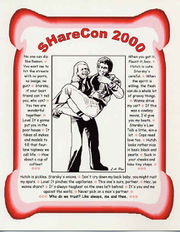 [The Trouble with Stakeouts]: Why this must be read: Starsky's mad and it's all about the lack of sex. "We had time," Starsky repeated. "What one of us didn't have was desire. That simple." But Starsky gets his and Hutch is all the things a good partner should be, even in the confines of the Torino. Huggy's discovery just makes a good thing even better. [1] 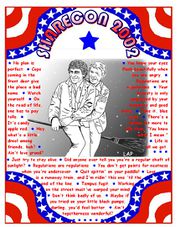 [It's a Wonderful Life]: Like the old movie asks, how does our presence affect those around us? We may think others would be better off without us, but is that necessarily true? Starsky's about to find out. Hutch and he had a fight where the last thing Hutch said to him was that Starsky was the worst thing that ever happened to him. It may be the last thing either of them remember about the other because immediately after that Hutch was hit by a car. Now Starsky thinks that Hutch was right, maybe everyone would be better off if Starsky hadn't ever been in their lives. Huggy sets out to prove him wrong.... So many instances: Humphries, the herion, Vanessa, Gillian, etc. So many times when Starsky was there, able to save Hutch time and again. But without Starsky around, what becomes of Hutch? Huggy reveals all and it's a sobering reality. Starsky learns his lesson well, but will Hutch wake up so that they can get back what they had? [2]

[Lingering]: Set during Sweet Revenge, this was originally in the SHarecon 2002 zine. Simplicity is often more powerful than complication. It starts out as a memory, Ruth Starsky remembering back to when her child was small and had a tendancy to linger. And he continued, throughout his life, to linger. He spent time exploring the world, his place in it, and the beauty that it held. Ruth has come to understand that is her son's gift, to linger and explore and love in his own way. It's what makes him special and makes him unique. [3]

[Talkin' Dirty Bingo and Cheap Toupees]: What other story features a 4 lb. Yorkie (2 lbs. of it teeth), a careening detective Hutchinson crashing into a door on a chase and nearly knocking himself out (“He was holding his nose. ‘Freeze! Bolice!’ he mumbled”), Huggy as a minister (at the ‘First Tabernacle of the Temple of Righteous Compensation,’ no less), and a couple of detectives caught performing a sexual act on Dobey’s desk that includes toupee frottage? Nobody does it quite like Flamingo [4] 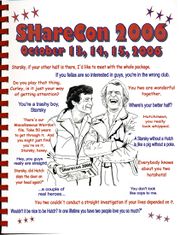 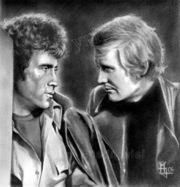 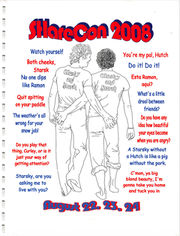 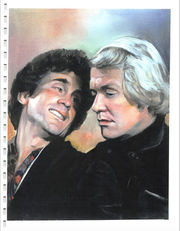 From the zine flyer:

[This zine contains] slash and gen short stories by Dawnwind, xtexan86, Nicky Gabriel, Cyanne, Angel, Laura McEwan, Missy LeHand, Jatona P. Walker, Barrie (MASHFanficChick), LilyK, Chel, jane, mah, Dana Austin Marsh, and another "Venice Place" tale by Rosemary and Flamingo. There are a number of short vignettes by Suz, art and poetry by Vedette Ciel and Moni K., and art pieces by Nicol Tyler, Nicky Gabriel, and Lorraine Brevig. In addition there are puzzles by Hutchlover, a zebra bookmark and a Torino origami by SHaron, Dungeons & Dragons character sheets by Dorothy, and an updated S&H Info sheet by Kat. Cover illo by L A. Pinn.

SHareCon 2012 contains 99 pages and was published in 2012. It contains a color illustration by Lorraine Brevig. 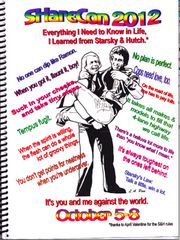 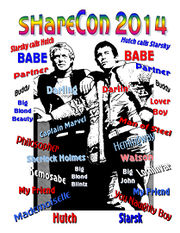 The cover for the 2014 SHareCon zine is a lovely celebration of the names our boys have for each other. Some endearments are the same, some are halves of a whole, and others are unique to the character of each man, but all of them say Starsky & Hutch and the love they have for each other.

It's a joy to be editing this zine once again; this is my fifth zine and seventh SHareCon overall. Once again, our con members, supporters, and friends have come through with wonderful stories, art, poems, puzzles, and crafts, each of which is very different but shows the common love we have for Starsky & Hutch. I hope you have as much fun reading as I did compiling.

Each creator has an email address listed. Please consider dropping them a line to let them know what you thought. Feedback doesn't have to be long to be greatly appreciated.

I'm thrilled to be one of the crazy people bringing you this year's SHareCon and we hope that you have a wonderful time at the con, whether you are attending in person or with us in spirit. 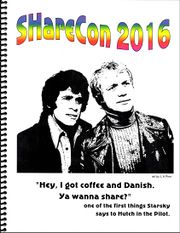 The con zine contains 103 pages of fiction, poems, photos, games, and an essay.

Note from the Editor:

This year's cover takes us back to the very beginning and the zine is a lovely celebration of Starsky & Hutch, their love for each other, and our love for them. Once again I had the honor of editing the zine and I'm grateful to everyone who sent us such lovely stories, art, puzzles, poems, trivia, and essays. I'm especially thankful for how easy you all were to work with, everyone was responsive and flexible and that made my job so much easier.

Every piece in the zine includes the creator's email address at the end. Please think about sending them feedback on their creations; even a short note means a lot.

Enjoy the zine, enjoy the con, and thanks for being part of the party. -Cyanne

Note from the Publisher:

Until you have created a zine, you cannot know how much work is involved. Cyanne took on the SHareCon zines years ago—I don't even remember when!—and has done an amazing job over the years on a tight schedule while also maintaining the con's website, the SH archive, creating surveys, and god-knows-what-else I think up for her to do at the last minute. Her zines have always been beautifully put together and well balanced, interesting, and fun books. Any writer or artist lucky enough to be featured in them has had their work treated with respect and care.

I cannot express enough gratitude to this woman who continues to work with me on cons, archives, advent and solstice calendars, websites, and of course, zines. She is a treasure, a creative artist, and I count her as one of my dearest friends. If you see me doing something creative on line, trust me, Cyanne is the wizard behind the curtains. I love you, my sister. You're the best. 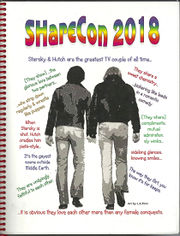 SHareCon 2018 contains 200 pages of fic, art, poetry, nonogram puzzles, and a fan account of meeting the actors at Trifecta 2018. The cover art is by L.A. Pinn and the cover design is by Flamingo.

SHareCon has never had a 200 page zine before. Ask anyone who's ever produced even a small zine, and they'll tell you it's an incredibly complicated process. And in spite of Cyanne's comments above, I did very little to make this gorgeous book happen. Cyanne is an amazing zine producer, a generous and careful editor, and one of the very hardest working fans I know. She'll edit this, too. She can't help herself. Thank God. Because everything I produce has errors. I trust her to find them. I trust her. And I thank her for all the work this book represents.

Special thanks, too, go to Keri, who reviewed everything I wrote, scraped off all the rusty parts, commented on all the illogical stuff, and basically stroked my stale and battered writing soul until she convinced me I could still do this stuff. Keri helped me get my stories into good enough shape for Cyanne, who then made them shine. I couldn't have done it without you guys.

A big thank you to Suzan for providing the kind of inspiration that could kickstart any frozen writer's heart! You'll see!!!

The SHareCon zine is supposed to represent a snapshot of the fandom today. This 200 page zine is saying loudly that the fandom is alive, it's vibrant, it's very much now. I hope you're in the Torino with us. And whether you're a Founding Mother, an old timer like me, or a sparkling new recruit, we're so happy to have you. Welcome to SHareCon. -Flamingo 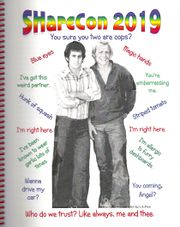 SHareCon 2019 has 161 pages. The cover art is by L.A. Pinn and shows an image of Starsky and Hutch surrounded by quotes and phrases from the show.

Not only were we crazy enough to hold SHareCon two years in a row, we were crazy enough to produce another zine. And you were certainly up to the challenge. Thanks to all of our contributors for the wonderful puzzles, art, and stories that I had the honor of compiling. And thanks for your patience with the editing process.

Every piece has the creator' email addresses at the end; please consider sending feedback to let them know you enjoyed their work. It doesn't have to be long, but every comment is treasured.

Whether you are with us in person or in spirit, enjoy the zine and the con.