The Loki/Sif Big Bang was a big bang challenge in Marvel fandom, focused on the pairing of Loki/Sif. Authors had to write a minimum of 10,000 words, and artists had to create a minimum of one piece of art, of a medium of their choosing.

TITLE: Speak In Rounds
AUTHOR: teslatricity
ARTIST: froopinghiddles
RATING: R
CHARACTERS/PAIRINGS: Loki/Sif, Jane/Thor
WARNINGS: semi-explicit sex, canon-typical violence, mention and brief description of physical torture, mention of and brief touching on mental instability/mental health problems.
SUMMARY: Hundreds of years after the events of The Avengers, Loki and Sif have left the palace with their three children and live in the northern regions of Asgard. It is the only way Loki can maintain some control of himself and be a father to his children, while still allowing Sif to serve as a warrior of Asgard. Their arrangement is out of necessity, but when Sif is captured by enemies during battle, Loki must either find a way to control his fears… or lose her forever.


TITLE: Deflection
AUTHOR: Flashysyren
ARTIST: Coffeesuperhero
RATING: PG-13
PAIRINGS: Loki/Sif; Thor/Jane
WARNINGS: Canon-typical violence, Blood in relation to a fight scene, Death of background characters in fight scene. [It’s a short scene, but a lot happens in it.]
SUMMARY: The war with Malekith has concluded and all seems well as everyone settles back into their lives, but for one warrior, nothing is as it should be, and she thinks that it’s very likely her fault that it is not. Figuring out how to find her footing in a place where everything has changed, and where happiness is much harder to find, may very well push her into a decision that will permanently take her away from those she loves. 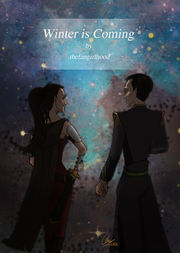 Cover art by lexieken for Winter is Coming

TITLE: winter is coming
AUTHOR: coffeesuperhero (thefangirlhood)
ARTIST: lexieken (artbylexie)
RATING: R
CHARACTERS/PAIRINGS: Sif/Loki
WARNINGS: Canon-typical violence, mild sexual content
SUMMARY: Of all Asgard’s inhabitants, only the Lady Sif knew that Loki was capable of traveling between the realms with the aid of his magic, and for centuries, they traveled together around the universe in secret. They sought their own adventures separate from Thor and the Warriors Three, falling in– and out– of love as Loki slowly descended into madness, while Sif could do little but watch as her lover and friend became her enemy.


TITLE: west of the moon, east of the sun
AUTHOR: nefelokokkygia ((ratedncc1701))
ARTIST: setphaserstoloveme
RATING: nc - 17
CHARACTERS/PAIRINGS: loki // sif
WARNINGS: post-avengers, far into the future; spiritual themes/sex in the context of spirituality
SUMMARY: loki and sif upon álfheimr, where wanderers ride dragons to the stars and the mountain caves sing where the waters of yggdrasill drip from the sky.


TITLE: though the truth may vary this/ship will carry our bodies safe to shore
AUTHOR: artyartie
ARTIST: bechedor79
RATING: PG-13
CHARACTERS/PAIRINGS: Loki/Sif, Jane/Thor
WARNINGS: Major Character Death (AUish)
SUMMARY: Loki and Sif, two maritime archaeologists, have found the Casket of Ancient Winters on the wreck of the Asgard. And they may or may not have fallen in love. When a Frenchwoman claims the Casket was stolen from her family centuries ago, long before the wreck, Sif, the Odinsons, and Jane and Darcy have to make a stake on the artifact. What none of them know is the past may be coming back to haunt them in ways none of them can imagine.