From Fanlore
(Redirected from Huddling for warmth)
Jump to: navigation, search

Huddling for warmth or blanket fic is a trope that is generally found in both het and slash pairing-oriented fanfiction, and occasionally in some gen Hurt/Comfort. [1] In fic with a sexual element, it is mainly used in order to maneuver two characters into a first time encounter. In gen fic, it is utilized to show closeness between characters.

The advantages of putting your OTP into a "huddling for warmth" scenario are legion. The two characters are trapped in one place with no distractions, alone, and so their attention is focused entirely on each other. The tone of the story can range from fluffy to angsty. The main problem facing the characters may be as trivial as a motel room with a broken heater, or as serious as incipient hypothermia compounded by serious injury (edging the trope into H/C territory where one partner must care for the other while he or she is completely vulnerable). Characters may be forced to share a sleeping bag or blanket, or even take off all their clothes and snuggle naked.

An example from a 2006 Stargate Atlantis fic:

One popular version of the archetypical "sharing body heat" story gets the characters into close physical proximity, and then cuts to the next morning, when they're all warmed up, relaxed, and naked... which of course leads to sex. Or the two characters may have sex as soon as they take their clothes off-- after all, what better way to warm up? [3] In another variation, the character who is more affected by the cold may go into shock and babble deliriously, revealing their secret attraction to their partner. From a fic prompt for 'Het Fic 2007': 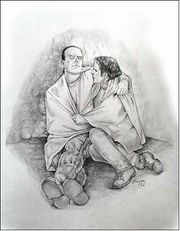 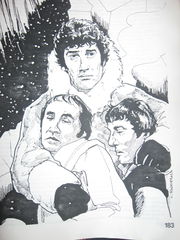