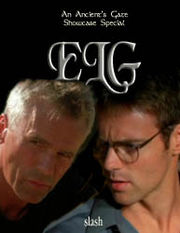 Documentary Jack - After a week recovering from a cold and separated from Daniel, Jack is bored, lonely and addicted to the Discovery Channel. Luckily, Daniel arrives home in time to get his mind back on more important matters.

Illumination - An alien artifact separates Daniel’s body and knowledge, leaving Daniel fading away. Can Jack find a way to bring them both together before Daniel disappears completely?

Thanksgiving - Jack's stuck in Washington, Daniel's stuck at Cheyenne Mountain with flu, and it looks like there's little reason to give thanks.

Just Good Friends - A letter from his ex-wife sends Jack on a road trip with Daniel that culminates in him realizing some new things about their friendship. Also, a happy ending for Sara as I got fed up with waiting for the show to do it, and they so owed her after Cold Lazarus.

Alter Ergo - SG-1 start behaving oddly and it seems likely alien technology is once again to blame but could it just be their own sublimated impulses making them act this way? Slash Jack/Daniel and Het Sam/Teal'c. Undercurrents - An AU response to the spoilers for Beneath The Surface. Jack and Daniel are enslaved by an alien race who wipe their memories and set them to work in a dangerous ice mine. Drawn to one another despite themselves, when the mine collapses they are both left stranded in an unstable trap with Jack injured and the memories from the events of 'Alter Ergo' leaving them ever more confused about their own identities.

Fire and Ice - I have always wanted to write a Daniel-falls-into-a-freezing-river-and-Jack-has-to-stop-him-getting-hypothermia story and this is it. (Well, the show won't provide me with one so what choice did they leave me?). And anyway it's fun making Jack jealous.