The Snape/Lupin ship explores the relationship between Severus Snape and Remus Lupin of the Harry Potter fandom.

In the third book, Harry Potter and the Prisoner of Azkaban, the character of Lupin is introduced and revealed as a former classmate of Snape's. The two characters have a long antagonistic canonical history, for which their relationship is characterised by schoolboy bullying, mutual antagonism, and averse exchanges.

Due to the long history and nature of their relationship, Snape/Lupin has been interpreted in many ways by fans over the years. Pastfic that takes place while Snape/Lupin were teenagers attending Hogwarts (known as "MWPP Era") is fairly common, for which the pairing oftentimes have a secret relationship that is eventually destroyed after either the interference of their friends or by Snape's discovery that Lupin is a werewolf.

Oftentimes the Snape/Lupin relationship is explored in fanworks that span over a significant duration of their lifetime. In these fanworks secondary ships, such as Remus/Sirius, are not uncommon. Angst, dark fic, first time, and fluff are also not uncommon. 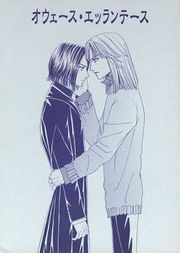